Here’s a story I came across that I found so interesting that I discussed it in my book about the history and future of money, “Before Babylon, Beyond Bitcoin”. It is a utopian future fiction that happens to have something to interesting to say about money, which is why it caught my eye. This is somewhat unusual for a utopian vision since, as Nigel Dodd observed in his 2014 book “The Social Life of Money“, utopias from Plato’s Republic to Star Trek don’t seem to include money at all, never mind M-PESA or Bitcoin.

Anyhow, the story that interested me has a ‘guy falls asleep under hypnosis and awakes a century later to find a model society, then finds it’s all a dream’ narrative arc that is hard to read with modern eyes, because the perfect society that the author imagines is a communist superstate that looks like Disneyland but run by Stalin. Everyone works for the government, and since government planners can optimize production, the ‘inefficiency’ of the free market is gone.

During his adventures in this new world the narrator, the time travelling protagonist, is told by his host in the modern era (the good Doctor Edward Leete), that cash no longer exists. Instead, the Doctor informs him, the populace use ‘credit cards’ for retail transactions. (He then, as it happens, goes on to describe what are in fact offline pre-authorized debit cards imagined in the technology of the day, but that is by-the-by.)

While the author does not talk about the telephone, laser beams or the knowledge economy, he does make a some insightful predictions about the evolution of money. When talking about an American going to visit Berlin, the good Doctor notes how convenient it is for international travellers to use these ‘credit cards’ instead of foreign currency: ‘An American credit card,’ replied Dr Leete, ‘is just as good as American gold used to be’.

This is an excellent description of our world after the end of the gold standard and the rise of a dominant reserve currency, what economists call the  “Bretton Woods II” era of monetary history. A clever prediction indeed. However, I think that the most fascinating insight into the future of money comes later in the book, when the time traveller asks his twenty-first-century host ‘Are credit cards issued to the women just as to the men?’ and the answer comes back ‘certainly’.

That answer might alert you to the age of the text, which in fact contains the earliest mention of a credit card that I have found anywhere as part of a fictional narrative. The book is by the American author Edward Bellamy and is called “Looking Backward, 2000–1887“. It was written in 1886, a century before the credit card became the iconic representation modern money, and it was one of the best-selling books of its day. I had a 1940s edition in front of me as I wrote my book, so it was still being reprinted sixty years later!

I cannot help but reflect that the discourse on money in that book is a wonderful example of how science fiction is not really about the future at all but about the present: the retort ‘certainly’ is clearly intended to surprise the Victorian reader as much, if not more, than the his prediction of glass tunnels that surround pavements when it rains.  It took a writer, not an economist or a technologist, to ask a simple question about money and get a surprising answer. Hold that thought.

Predictions are hard, especially about the future of money

Now let us have a go at predicting the financial system half a century onwards. Where do we start? Well, a good rule of thumb for futurologists is that if you want to look 50 years forward, you need to look at hundred years back because of the increasing pace of change. A hundred years back we had the telephone and global markets connected by instant, global communications. We had the Bank of England and the Federal Reserve. We had wire transfers. We had the world’s first commercial aviation service, created as it happened to accelerate the clearing of cheques between Chicago and New York.

A century ago we were also coming to the end of the era of the classical gold standard. The demise of that global financial system was brought about by the pressures of global conflict and depression that ultimately led Britain to abandon it permanently in 1931 after a temporary suspension that began in the middle of First World War and lasted until 1925. Some people think we are now coming to the end of the Bretton Woods II era and, as The Economist observed recently (“Into the woods”, 17th August), saying that international trade is complicated because “most countries have their own currencies, which move in idiosyncratic ways and can be held down to boost competitiveness”, it is not at all clear what is coming next!

If this is correct, and it seems likely that it is, then then what will replace the IMF, central banks and commercial banks offering credit when it comes to creating money, facilitating payments and prosperity? The reaction of regulators around the world to one alternative, Facebook’s proposed “Libra” digital currency, seems to indicate that the incumbents are not going to give up with out a fight. Yet given the history of financial markets and institutions, and given that we know that change is inevitable as the structures reshape under social, regulatory and technological pressures, it is not good enough to simply say that the incumbents are wrong. We (ie, the financial industry) must help to create a vision of future banking that helps us all – and I include the regulators in this – to shape strategies that lead to a financial sector that serves society better.

If we set aside both the misplaced view that the status quo will prevail and the Bitcoin maximalists fantasies of a completely decentralised society, where do we look to find believable alternatives? We all hear the speeches of the regulators, read the annual reports from the bankers, see the demos of the technologists and the slide decks of entrepreneurs. But have any of these created a vision in your mind? Perhaps it’s time to return to my opening observations to develop a narrative just as surprising to contemporary audiences Bellamy’s was to a Victorian one.

So. What do we now see a couple of generations from now. The world of Star Wars with a “galactic credit” that is universally accepted. That doesn’t seem right to me. A single currency doesn’t really work between Germany and Greece, so how it would work between Earth and LV-426? Would the use of a Synthetic Hegemonic Currency (SHC), to use Mark Carney’s words in the Financial Times (“Mark Carney calls for global monetary system to replace dollar”, 23rd August 2019), function in these circumstances as a trade currency for the universe? 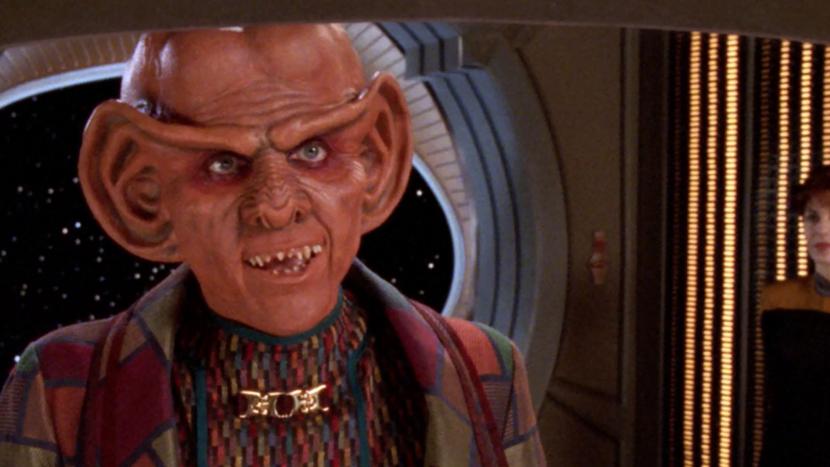 What about the world of Star Trek with no money at all, save the gold pressed latinum of the Ferengi (shown above), valuable because it’s the only substance that the replicators can’t produce? How about the world of Charles Stross’ “Neptune’s Brood” where there is fast money and slow money that relies on cryptography so it only travels at one-third the speed of light?

How will people transact? Will it be the world in Robert Heinlein’s “Beyond the Horizon” where the government has an “integrated accumulator” (what we would now call a blockchain) to record all transactions and the finance minister has dashboard to see just how the economy is doing? The integrated accumulator sounds very much like the “compubank” in Margaret Attwood’s “The Handmaid’s Tale” which tells what happens if this machinery falls under the influence of fanatics, in that case as theocratic US administration that bans and blocks women’s payment cards? Will cash, indeed, be banned or will it simple be cash as in William Gibson’s “Count Zero” where the protagonist finds himself in a near future where he  “had his cash money, but you couldn’t pay for food with that. It wasn’t actually illegal to have the stuff, it was just that no- body ever did anything legitimate with it”. (Which, frankly, sounds like Sweden rather than some future dystopia.)

What if money as we know it vanishes as a transactional medium of exchange? Will it be the world of Bruce Sterling’s “Distraction” in which distributed servers manage reputation as a currency, a theme also present in Cory Doctorow’s “Down and Out in the Magic Kingdom”. I am naturally attracted to these images of a future in which identity, trust and reputation reconnect us with our neolithic heritage (indeed, a few years ago I wrote a book called “Identity is the New Money”) and dispense with many kinds of intermediaries! Will this free us or will it fulfil the prophecy of the Book Of Revelation 13:16-17 that “no man might buy of sell save that he has the mark, or the name of the beast, or the number of his name” enslave us? Should we begin our scenario planning for these transactional environments now (hint: yes) or should we leave the technologists to choose a future for us?

Next week, for the Innotribe closing keynote of most important global banking conference of the year SIBOS, my good friend Brett King and I will be looking how writers have thought about the future of payments, banking and money to see if their narratives can help us to formulate strategies in this space and to see if we can find the hard question and surprising answer for the world of 50 years from now. I have an idea of what it might be, but let’s see how Brett, me and the Innotrible audience develop our thinking on the day. See you there.