As I explained to the Financial Services Club in London recently, I have a theory that while Bitcoin isn’t the future of money, tokens might well be. In case you are interested, here’s the deck I presented to them: it’s in three parts, first of all a high-level explanation of what tokens are, then a discussion about using tokens to implement money and finally a model to help facilitate discussion around these topics.

The Smart Money is Tokens from David Birch

Of course, I’m not the only one who thinks that the financial services mainstream should be developing their token strategies. At Money2020 Asia in Singapore I had the privilege of interviewing Jonathan Larsen, Corporate Venture Capital Manager at Ping An and CEO of their Global Voyager Fund (which has a $billion or so under management). Jonathan has already forgotten more than I will ever know about financial markets and as he is also Chief Innovation Officer at Ping An (and a very nice guy too), I take his views very seriously. When I put to him that the tokenisation of assets will be a revolution, he said that “tokenisation is a really massive trend… a much bigger story than cryptocurrencies, initial coin offerings (ICOs), and even blockchain”.

He went on to say that he had no doubt about the potential for tokenisation to “reduce friction across every asset class and to create fractionalization of assets where it does not exist today”. In fact, and I paraphrase only slightly here, he said that when the token market is properly regulated and the technology is stable then everything will be tokenised.

Why do people like Jonathan (as opposed to techno-deterministic utopians such as myself) think that tokens are such a big deal? I think it’s because tokens are the first viable implementation of the 1990s dream of digital bearer instruments with the “code is law” (sort of) management infrastructure. They allow for the exchange of assets in an auto-DvP (delivery versus payment) mode with no clearing or settlement which means for efficient, liquid markets.

Now, one of the first steps towards a regulated token market has come the Swiss regulators (who are important because of the Zug “crypto valley” that has become the home of many token plays). The regulator there, FINMA, has developed an approach based on the underlying purpose of the tokens that are created. FINMA categorises tokens into three types: Payment tokens (ie, money), Utility tokens (tokens which are intended to provide digital access to an application or service) and Asset tokens (which represent assets such as stakes in companies or an entitlement to dividends). Of course, hybrid forms are possible and in practice there are likely to be a few different configurations. One good way to think about this, I think, is to think in terms of combinations of these token types as a means to implement the “digital bearer instrument” (DBI) that has long been seen as the basis of the post-internet, post-crypto financial marketplace. 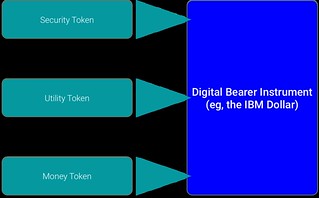 This is a realistic vision of the future. DBIs as a synthetic instrument comprising regulated tokens, DBI trading that operates without clearing and settlement on shared ledgers and shared ledgers with ambient accountability to create marketplaces that are not only more efficient but better for society as a whole. I touched on this in my talk at the FS Club but then went on to focus on the specific implications for digital money, as it is interesting to speculate what digital money created this way might look like.

We might, for example, imagine that for tokens to be used as money in the mass market they should be much less volatile than cryptocurrencies have been to date. Hence the notion of “stablecoins” that are linked to something off-ledger. An example of this category is the “Saga” coin (SGA). SGA has some pretty heavyweight backers, including Jacob Frenkel, chairman of JPMorgan Chase International, Nobel prize winner Myron Scholes and Emin Gün Sirer, co-director at the Initiative for Cryptocurrencies and Smart Contracts at Cornell University, so it deserves a look. This is a non-anonymous payment token that is backed by a variable fractional reserve anchored in the IMF’s special drawing right (SDR) basket of currencies which, as the FT pointed out, is heavily weighted in US dollars. These reserves will be deposited with regulated banks through algorithms in the underlying smart contract system.

It seems to me that initiatives such as Saga are more representative of the future of money than cryptocurrencies such as Bitcoin, but even they represent only part of the spectrum of possibilities that will extend across many forms of tokens. As I wrote last year, in “Bitcoin isn’t the future of money, but tokens might well be”, tokens won’t only be issued by companies, of course. It seems to me that tokens that implement the values of communities (and, because they are “smart”, can enforce them) may come to dominate the transactional space (think of the Islamic e-Dinar and the London Groat).

The moving finger writes; and having writ

Moves on; nor all your piety nor wit

shall lure it back to cancel half a line,

Nor all your tears wash out a word of it.

OK, I added the hashtag, but the rest is from Edward Marlborough’s 1859 translation of the Rubáiyát of mathematician, astronomer, philosopher and poet Omar Ahayyám (1048-1131).