The wonderful people of the Economic Club of Minnesota (ECOM) invited me to Minneapolis to give a talk at their October luncheon. I was talking, generally speaking, about my “5Cs”: the potential issuers of future digital currencies. If you click on this picture, it will take you to a video of the talk and the Q&A session afterwards. One of the points I made in the talk was the payments in the future are about my mobile phone talking to your mobile phone, not me handing something (banknotes, credit cards, cheques, whatever) to you. This means that the adoption of new forms of money can accelerate without updating or replacing cash registers or plastic cards.

The mobile phone is taking us into a cashless future. 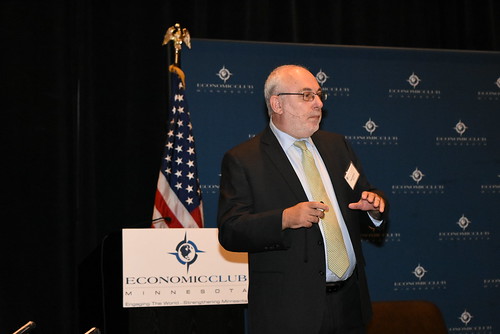 The Club had arranged for a driver to pick me up from the airport and take me to the hotel. He was very interesting man of Somali origin and we had a nice chat in the car. By the time we got to the Hilton, I thought I ought to call my hosts and ask them to have him onstage instead of me!

Well, he told me about his last visit to the old country, when he was surprised to find himself paying for everything (and he meant everything, from a nickel payment in the food market to a $400 remittance to relatives) using a mobile phone.

“It works on trust”, he told me, “because there is no government”.

(I was thinking of telling him that in my opinion the reason it works at all is because there is no government, because in places where the government has done its best to regulate mobile payments, such as India and Nigeria, mobile payments do not have anything like the penetration that they do in Somalia.)

Mobile payments are spreading. New interfaces (voice), new security (face), new authentication techniques (continuous passive authentication) and evolving network coverage mean that mobile phones are simpler and more secure than cash for a great many people around the globe. But which country will win the race to cashlessness?

Well, that’s where my driver comes into it. My reasoning as to why he might have been a good choice for a speaker, apart from the fact he was smart and loquacious, is that it is his motherland, rather than the UK (or Sweden, or even the USA, where the Federal Reserve tell us there are now more $100 bills in circulation then there are $1 bills) that may well become the world’s first cashless country. A recent World Bank report showed that Somalia has one of the most active mobile money markets in the world, outpacing most other countries in Africa. It’s even superseded the use of cash (their words, not mine) in the country. Let me repeat that for emphasis. The World Bank say that in Somalia, cash has been “superseded”. It is approaching irrelevance (apart form anything else, no-one uses it there because of widespread counterfeiting) as Somalia heads toward cashlessness.

(As I said in my book, a cashless country does not literally mean a country where cash is extinct. Some cash will linger for post-functional purposes, such as pinning to wedding dresses or waving around in casinos, but that cash will be irrelevant to GDP.)

Interestingly, within Somalia there is already an almost cashless enclave where “payments through mobile she says have rocketed from 5% two years ago to more than 40% now”. That enclave is Somaliland (the breakaway republic of 3.5m people within Somalia), and it may well be Somaliland, rather than powered-by-Swish Sweden, as the place where cash will first vanish into memory. And if your memory is good, you may recall that I wrote about it six years ago, when I said that “Somaliland might well become the world’s first cashless country. Not Iceland or the Netherlands, Korea or Kenya, but Somaliland”.

It hardly difficult to predict that cashlessness would come to Africa first, because as I have often said at conferences, in seminars and when interviewed, it is the mobile phone (not the payment card) that is the nail in cash’s coffin, because a mobile phone is a means to get paid as well as a means to pay. It’s both a “card” and “a terminal” in the world of Visa and PayPal, Faster Payments and Venmo. The spread of mobile payments, rather than the spread of plastic cards, will see cash become irrelevant to law-abiding people in a great many countries. And that cashless world is almost here. As everyone observes, if you go to China or Kenya, you’ll see people paying with phones for everything. In fact when I was in China last, I was in a near-permanent state of shock watching people for everything, everywhere with ubiquitous bar codes. (And almost all of those payments went through third-party providers (WeChat and AliPay) rather than through bank services.)

While in urban China, cash is becoming obsolete, it is still widely used outside the cities, which is why I still think that Somaliland might win the race though, just as I said all those years ago. Don’t listen to me about it, listen to what Mr. Rashid, a tea seller there, has to say about it: “I never see cash”. And his teas sell for 2,000 Somaliland Shillings each. Which is about 25 cents. A quarter. And his customers use phones to pay.

The world of mobile payments has fascinated me from its earliest days and I’ve been able to observe its evolution first hand. My colleagues at Consult Hyperion worked on the UK’s first prepaid scheme, first WAP “walled garden”, the first NFC trials and, I’m proud to say, M-PESA in Kenya. Experience has given a pretty realistic picture of what is happening across the payments industry in general and mobile payments in particular, and my view is that we are heading toward a tipping point that will see us accelerating toward cashlessness.

My chum Tony Poulos interviewed an analyst from Ovum about mobile data pricing recently. I was listening to this, and it reminded me about a huge telecommunications conference that I attended a couple of months ago. There were hundreds of people and operators from all around the world. At one point during the event, the wifi went down. At this point, not only did people stop blogging, twittering and otherwise recording what was going on but actually stopped looking at and listening to the speaker. Basically, at an event full of people from telcos, no-one had data roaming turned on.

The mobile operators have priced mobile data roaming so insanely that they are encouraging their customers and their own employees to seek alternatives. Instead of making a reasonable amount of money from them, they make none, and are actively training the customers to reduce future revenues. I don’t need my e-mail every second – it’s not like I’m a heart surgeon waiting to hear about a transplant – and people can text me if there’s anything urgent. So I leave roaming turned off and wait until I walk part Starbucks or wherever.

If they keep this up, they may be able to persuade to turn off mobile data completely.