I thoroughly enjoyed the FS Club discussion with eminent futurologists looking back on their predictions from the year 2000 (and learning from them where they were wrong) and looking forward t0 2040. I especially enjoyed it because one of the speakers was Gill Ringland. Gill is now a Director of Ethical Reading, set up to energise an ethical business climate in the Thames Valley, but in the past was head of strategy at ICL amongst other things. I had the good fortune to meet her way back, at the 2012 Digital Money Forum.  I’d been very impressed by a report that she’d written and asked her to come along and give a presentation about it. She gave a super talk about her exploration of the world of financial services in 2050 from the report “In Safe Hands” (published at Long Finance). 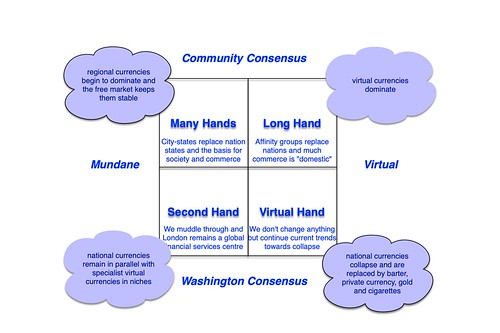 I wrote at the time that she had used a tried and tested scenario planning technique (the same one that I always use these days) to generate a 2×2 matrix of four scenarios imagined using the “Washington consensus” vs. “Community-based values” on one axis and “mundane” and “virtual” (essentially) on the other axis to reflect the extent to which real or virtual communities come to shape the economy and therefore financial services. Gill explained at the time that in order to create scenarios (i.e., internally-consistent views of possible futures) for a generation from now, she found it useful to look two generations back, and consider the asset classes managed by the financial services industry in 1930. These were broadly commodities, cash, equities and brains. Looking forward, she added a fifth asset class based on demographics for 2050.

Transactions, therefore, become the exchange of these asset classes (but in digital form, of course). This seems to me especially interesting in a city-centric context because, for example, a permit to reside in a desirable city could well become a key tradable commodity. Indeed, this view was reinforced in the FS Club discussion, where the even more expensive view that cities might begin to dictate the policies and trajectories of the nation state was put forward. In this context, Gill’s prescient narrative of the “C50” (the organisation of the 50 richest city-states that will replace the G20 as the mechanism for “managing” the world economy) which came from her “Many Hands” scenario, forms a solid narrative around the future economic organisation of a successful, functional world. As Martin Wolf wrote in the FT around that time “this is the age of cities, not of national economies” (going to say that “it is high time London became a true city state).

(This surely implies that the “cash” of cities will become the most important kind to the average person. In other words, having abandoned Sterling for London Lolly and US Dollars for New York Notes and LA Loonies, will these be sufficient to provide the medium of exchange for the future economy. Right now, almost all transactions are local and even at the national level only 1%-2% of European transactions are cross border. If I live in London and use London Lolly for the train, for lunch and at the supermarket, is it such a big deal to convert it to Moscow Moolah to buy something online? Especially when your phone does it for you?)

A world economy built up from cities and their hinterlands will obviously demand different financial services and institutions from one based on national economies. This was foreseen by the wonderful Jane Jacobs’ work “Cities and the Wealth of Nations” that was published way back in 1984. My Jacobs-influenced city-centric perspective was reinforced when I happened to read a Canvas8 report “The city an an identity anchor” (which echoed Gill’s points about identity, which I’ll return to in a minute) and then the World Economic Forum (WEF) 2017 report “Cities, not nation states, will determine our future survival”.

What this means to me is that the future sense of identity will be city-centric, with people seeing themselves as Londoners and New Yorkers rather than Brits and Yanks, a view that the COVD-19 crisis seems to have reinforced. Their loyalties will be more local than ours and the relationships between cities will replace the relationships between countries as the most important tensions and dynamics. I can’t help but wonder if cities will begin by forming trade pacts and then moving on to form defence alliances, bearing in mind that the wars of the future will be fought in cyberspace. Never mind national identity in the India (Aadhar) model or provincial identities as in Canada. What if these specific city identities are the core of the future digital identity models?

This leads me to wonder yet again what the model of city-centric identity might be. How will those identities relate to trade, commerce and society as a whole? Which attributes will be the valuable ones (beyond is_a_person, of course) and which will atrophy to form vestigial credentials of no practical value? When discussing the C50 scenarios back in 2012, Gill made a passing but powerful observation on future transactions and it has stayed central to my thinking on the topic. She said that individuals will protect their “personal identity, credit ratings and parking spaces” at all costs and I think this is a powerful and imaginative narrative to group ideas about attributes and credentials.

Personal identity. I might take issue with Gill here and say “personal identities” but I know what she means. An infrastructure that delivers both security and privacy to identity transactions of call kinds will be needed to support the reputation economy of the networked society. There is no possibility of social media and social democracy co-existing in this future scenario without such an infrastructure.

Credit rating. The commercial reputation that means that you can buy or sell, whether an individual or an organisation will be central to economic existence. In a networked society, this is more likely to be something that comes from the social graph than the conventional credit rating of today.

Parking spaces. This means the (tradeable) right to reside in a particular place. These rights will certainly be of critical importance to the individual, since their own identity will be closely related to the city (and hinterland) of residence. There’s no reason why (for example) London and Scotland should have the same immigration rules. If that sounds a little far-fetched, I can tell you that it is happening right now. I came across an interesting case study from Denmark via the social anthropologist Camilla Ida Ravnbol from the University of Copenhagen. Since the COVID-19 crisis has restricted travel, any “permission to work in Copenhagen” document has become a valuable traded commodity in the marginalised Roma community that needs access to the city to earn money (by collecting materials for recycling, for example).

In the language of digital identity, digital money and digital diligence, then, this line of thinking imagines a reputation economy anchored in the mundane which is (as I explored in my book “Before Babylon, Beyond Bitcoin“) a landscape animated by new technology but shaped by physical as well as virtual communities. What does this all mean for transactions? What does it mean for the future of the financial system? Or, more specifically, to answer the question asked at the very beginning, what does it mean for the world in 2040?

Well, I don’t know. But if I wanted to find out, I’d start by talking to social anthropologists. Fortunately, Camilla I will be chairing a session that touches on these issues along with Atreyee Sen at the European Association of Social Anthropologists conference in July. As the conference is now online, you can sign up and log in online to join us here. We are Panel 57, “Digital encounters, cashless cultures: Ethnographic perspectives on the impact of digital finance on economic communities”, so please do pop in and take part in the discussion. 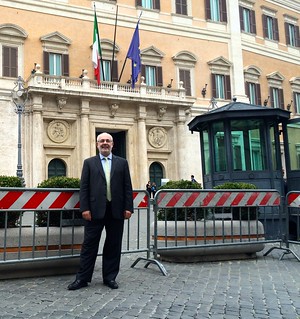 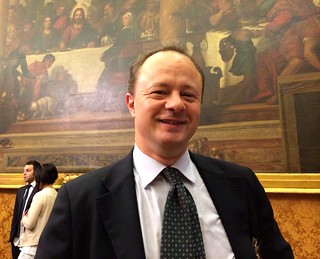