We’re seeing a lot about strong customer authentication (SCA) at the moment because of the requirement of the Second Payment Services Directive (PSD2) that comes into force next week on Black Friday (Friday 13th September). That’s because there’s a lot of fraud online, it’s getting worse and the strong authentication of people (in this case, online customers) is seen as being a way to tackle it. PSD2 demands SCA, and this means that European banks and Payment Service Providers (PSPs) have had to up their game.

I’m actually quite surprised to see that some of them are still using text messaging to send a “one time password” (OTP) to customers for authentication. It’s not because, as the British newspapers were quick to point out, people who can’t get a mobile signal or don’t own a mobile phone face, as The Guardian put, it being “frozen out of internet shopping as banks are increasingly insisting that online payments are verified by text”. This is indeed a valid concern, but what I find most disturbing about this report is that anyone is verifying online payments, or indeed any other important online transaction, by insisting that they are authenticated by text messages! With the explosion of “smishing” (ie, phishing attacks via SMS) and the daily tales of account takeover, bitcoin theft and payment fraud carried out via SMS, you really do have to wonder why text messaging is still being used in this context.

This is hardly a new issue. More than a decade ago I wrote about the comments of Charles Brookson, then the head of the GSMA security group who, when talking about the use of SMS for financial services, made the point that SMS has, to all intents and purposes, no security whatsoever. Structurally, it has always seemed to me to be irresponsible for financial institutions to rely for security on something that is not secure and over which they have no control. Given the prevalence of smart phones, you would think that SMS would be long gone, but it is only now that German banks, for example, are giving up on SMS OTP in response to the PSD2 requirements for SCA.

How will this SMS-less strong authentication be implemented? For payments it will be through the new version of the scheme’s “Three Domain Security” (3DS). 3DS version 2 introduces “frictionless authentication” and will be the main card authentication method used to deliver SCA in Europe. It works by allowing retailers and their PSP to send many more data elements with each transaction. These data elements – such as the shipping address, customer’s device identity and their transaction history – mean that the issuer can carry out more sophisticated risk management.to decide whether SCA is needed or not. In most cases, I would guess (since the issuers will use sophisticated risk management platforms with machine learning and all that sort of thing), no further authentication will be needed. But where it will be needed, Barclaycard (for example) can send a message to the Barclaycard app on my phone and ask me to authenticate myself.

(As it happens, Barclaycard have just sent me another “PINsentry” card reader together with an instructional pamphlet, so I will make every effort to use my Barclaycard online just so I can see how it works. Of course it means I’ll will have to carry the card reader and my Barclaycard around with me at all times in case I want to buy something online, but remember I do this so you don’t have to.) 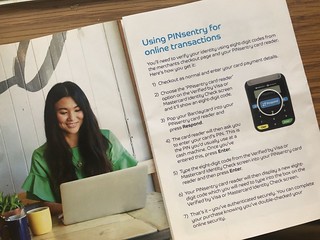 In my opinion, the best way forward now is through the bank apps themselves. Google found in their research on authentication for account recovery that whereas 2FA SMS stopped three-quarters of targeted attacks, in-app solutions stopped 90% (and 99% of bulk phishing attacks). It would be good if this approach was adopted across the board – not only for retail payments but for logging in to bank accounts, authorising transfers and everything else. But if customers get mixed up between expecting an e-mail or getting a text, seeing an in-app message sometimes but not other times, then fraudsters will be quick to exploit the situation. In which case (as I suspect) the introduction of strong authentication will actually leader to more fraud. We need both a better and more consistent approach to authentication for financial services. We need to standardise on the approach and the execution and the UX so that consumers can be confident that they are communicating with their bank or whoever.

My Consult Hyperion colleague Tim Richards recently set out this problem in a very clear way [The Paypers, 27th August 2019]. He asks us to imagine what would have happened if SCA had been mandated for face-to-face commerce but, as with PSD2, no technological solution was provided. In that case, instead of our EMV-standard chip and PIN payment system we would have had each bank creating its own solution. Then, as has happened online, every time a consumer went into a shop to buy something they would face a different authentication depending on their bank! Tim’s good advice is that regulators need to take a step back, “temporarily drop anti-competition laws and insist that banks come up with a minimum standard for SCA” to support growth in online commerce that is accompanied by real security because customers know what to expect and retailers aren’t disadvantaged by variable SCA experiences leading to cart abandonment.

He’s right, of course. And it terms of implementation it has long been clear that the best architecture for what I am now labelling Standard Strong Customer Authentication (or SSCA) is biometric authentication against a revocable token stored in tamper-resistant local storage. We all carry a device capable of implementing this design at a manageable cost: the mobile phone.

(As an aside, since the mobile phone operators control a standard item of tamper-resistant hardware in all phones — the SIM — why we are not all using a standard authentication from our mobile operators already is a mystery, but that’s a different point and I don’t want to get diverted by Mobile ID Connect here.)

This point is that with really strong authentication, your bank shouldn’t be sending you a text message or an e-mail or whatever, it should be using real cryptography to send a message to the bank app on your mobile phone. So, when you ty to buy something online with your Barclaycard your Barclaycard app pops up on your phone and asks you to authenticate.

If the bank (or anyone else) cannot reach the mobile app then there should be a standard fallback across all service providers which would probably be a voice call thus opening up the use of voice recognition and authentication. And if you are online buying something or transferring money to someone or closing an account and you can’t be reached via the mobile app or by a voice call well… then what are you doing buying things online in the first place?

Surely this is the most practical way forward now that the Financial Conduct Authority (FCA) has confirmed that it will not take enforcement action against businesses who do not implement SCA until March 2021, there is now some time to prepare a mobile-centric SSCA pathway for UK banks and businesses.