I remember sitting through a discussion about the security of a proposed new payments security in an online meeting recently when one of the people round the metaphorical whiteboard said something about “John Dillinger’s famous quote” that he robbed banks because that’s where the money is.

Due to my obsessive nature I was forced to immediately halt the proceedings and annoy all participants by pointing out that the pithy maxim is nothing to do with the much-celebrated former public enemy no.1, who was shot dead by the FBI in 1934, but is in fact generally attributed to another noted criminal from the era of bank branches, leather wallets and physical cash: “Slick” Willie Sutton.

That famous phrase “that’s where the money is” dates to 1952, when it appeared in a Southern Californian newspaper. Today it is so commonplace that social scientists have dubbed the process of considering the obvious first as “Sutton’s Law”. In his autobiography, however, Sutton denied ever saying it!

(In fact, and more interestingly in my opinion, in that same autobiography he wrote “Why did I rob banks? Because I enjoyed it”.)

Dillinger and Sutton are figures from a bygone age, when the people who robbed banks didn’t work for them. Click To Tweet

Today when most of us think about bank robbery, we think about people inventing complex derivatives and amassing fortunes while the institutions that house them amass fines, bankruptcies and bailouts. But it turns out that your grandparent’s bank robberies are not entirely extinct. American Banker says that violent bank crime has indeed become increasingly less common in recent years (although it ticked back up in the middle of the last decade) but there were still 1,788 bank robberies in the US in 2020, the most recent year for which FBI statistics are complete, compared with 5,546 ten years ago.

(By comparison, in largely cash-free Sweden, there were five bank robberies in 2020, down from the the 2011 peak of 43. Only three of these were armed robberies.)

In the fintech age, there are really only two ways for armed robbers to go. They either have to scale up, or look at adjacencies. So where can look for a glimpse into those strategies? Well, Brazil is a hotbed of fintech innovation (the noted investment outfit Berkshire Hathaway has just dumped shares in Visa and Mastercard and has bought $1 billion in shares of the Brazilian digital bank Nubank) so that seems a reasonable place to look for what economists call weak signals for change. Here are two I found to illustrate the point.

First, scale. Banks branches just don’t have that much money in them, so given the fixed costs of shotguns, balaclavas and hideouts, it makes senses to rob a bunch of them at once. Armed robbers in the city of Araçatuba, a few hundred miles north-west of São Paulo, decided to scale up in this manner. They cut off key access roads to the city with burning vehicles, attacked the local military police station and placed some 40 explosive devices at 20 different locations around the city. Then they robbed multiple banks and escaped by tying hostages to their cars as human shields.

The alternative is to look for adjacencies where core skills and sunk costs can be exploited. This appears to be the route taken by many Brazilian armed robbers who have decided to move into the electronic age by kidnapping people off the street and then forcing victim’s families to send them money by credit transfer using the new Pix instant payments platform. In fact this mode of operation has become so common that the central bank has been forced to restrict the use of the instant payments platform and if a bill in the São Paulo Legislative Assembly becomes law, it will prevent financial services providers and payment institutions from processing payments through Pix at all until the Central Bank improves consumer protection.

(Pix is the instant payment system launched by Banco Central do Brasil in October 2020. Funds can be transferred between checking, savings or prepaid accounts in seconds. Anyone with a ID and a mobile phone can use the service, which has been a huge success, with something like tw0-thirds of the adult population using it. It carries about three-quarters of the nation’s transactions.)

The end of cash doesn’t mean the end of crime. But it does mean that we have to do proper risk analysis on its replacements, whether these are going to be electronic money (eg, instant payments in the UK, where authorised push payment fraud is out of control is already more than card fraud), electronic cash (in the form of public or private digital currency) or cryptocurrency.

(This is an edited version of an article first published on Forbes, 25th January 2022.)

When most of us think about bank robbery, we think about people inventing complex derivates and amassing fortunes while the institutions that house them amass fine, bankruptcies and bailouts. But it turns out that your grandparent’s bank robberies are coming back into fashion. American Banker says that violent bank crime has become increasingly less common in the past decade, but that the rate of robberies has ticked back up in recent years.

At first I thought this might be a hipster revolt, like with vinyl records, but that doesn’t seem to be the case. So I’ve no idea. I don’t understand bank robbery. I remember getting into an interesting discussion about bank robbery at a lunch a while back. We were talking about risk and risk analysis. I was trying to make some points about why proper risk analysis like this is a more cost-effective way to proceed than (for example) panicking about newspaper stories on hacking, and that led to a train of thought around cost-benefit analysis for the robber, not the bank. Are robbers put off by thick doors and barred windows and such like? Are robbers deterred by visible, physical symbols of security? Come to that, should be bother with physical security at all in banks?

This is a fair point. So it set me thinking: if you are an amoral sociopath desperate to amass as much money as possible, are you better off robbing a bank or working for it? As a responsible father, I want to help my sons chart the best course for life. Right now, they are at University studying socially useful subjects in science and engineering. Having myself studied science only to become trapped in mortgage serfdom and forced to work until I drop, I am trying to persuade them to become Somali pirates or Wolves of Wall Street, without much success so far. So I understand that side of the equation, but am less certain of the other. Remember that old paper “The Decision-Making Practices of Armed Robbers” by Morrison and O’Donnell. It’s a study of armed robbery in London and one of my favourite papers. It is based on first-hand research (viz, the analysis of over 1,000 police reports and interviews with 88 incarcerated armed robbers).

While it’s about the UK rather than the US, I’m sure the thought processes of the perpetrators must have some similarities. Crucially, the paper notes that “almost all of these robbers evaluated the offence as having been financially worthwhile (aside from the fact that they were eventually caught and punished for their crime)”. So robbing a bank seems like good idea, if you exclude the possibility (in fact, the likelihood) of being caught. I suppose this is standard Jordan Belfort, Bernie Madoff thinking thought isn’t it? Unless people believe they will be caught (and these people don’t) then they only consider the upside.

(One of the interesting snippets it contains is that a great many of the armed robbers in the UK use imitation firearms even though they could have access to real ones. I imagine that in the US the use of imitations is vastly less prevalent, since it’s presumably harder to buy an imitation gun than a real one there.)

So, what to do? While glancing back over the paper I note that the authors say that it doesn’t seem practical to “expect financial institutions and commercial properties to reduce counter cash much more than they already have”. That may have been true when the paper was written a few years ago, but it clearly isn’t true now, since both bank branches and businesses in many countries are becoming cash free. And this is a good thing, because as we all know there is a direct and measurable relationship between the amount of cash out there (more on this later) and the amount of crime. As the paper says, “even when the amount of money obtained was quite small (an element often touted in support of the irrationality of economic criminals), it must be recognised that even apparently small sums may be adequate for the offender’s immediate needs. Hence, gains may be subjectively much larger than they appear”. 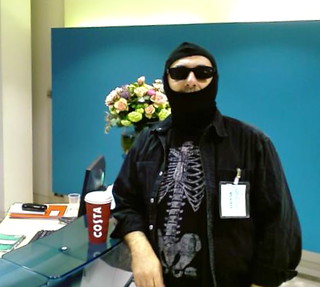 It’s a stick up

The rewards of armed robbery seem to me, then, as an educated middle-class professional, to be rather low. Yet they are still sufficient to attract the robbers, because their needs are immediate and limited. I want a holiday home in the South of France but the guy in the Nixon mask isn’t robbing a bank to pay his way through college or to obtain seed finance for a start up, he just needs to buy a car or some drugs or whatever. This paper seems, then, to indicate that so long as there is some cash in the till, there will be robberies. This is not an observation confined to banking. A study of the American Electronic Benefit Transfer (EBT) program found that “the EBT program had a negative and significant effect on the overall crime rate as well as burglary, assault, and larceny”.

What they are talking about here are US programmes where benefit recipients are paid electronically and given cards that they can use in shops instead of being given cash. The authors found a 10% drop in crime correlated with the switch to EBT. It seems pretty overwhelming evidence, and even more so if you read the paper, which notes no impact on crimes that do not involve the acquisition of cash. If we can to stop armed robberies, that would surely be an excellent social benefit to the move to cashlessness and would help us to explain the nature of appropriate regulation to legislators.

But back to the specific point about the relationship between bank cash and robberies. With the rewards from robbing banks and businesses falling  armed robbers, like everyone else, follow the money – literally – and so cash-in-transit (CIT) robberies are now the preferred option. We see the same in Europe where countries that have much higher usage of ATMs have much higher CIT robbery rates than countries that have lower ATM usage (see, for example, Sweden and Denmark).