You may have heard of Matty Simmons. He was the man behind the movie “Animal House”. That’s interesting enough for one lifetime. But if you are interested in electronic payments, you should read his 1995 book. I have it in front of me as I write. He just died, aged 93. My friend the author, storyteller and all round nice guy Jeffrey Robinson wrote a brilliant piece on Simmons’ role in founding the payment industry, and it was brilliant. He was, as Jeffrey put it, a witness to an event “which changed our world, but never actually happened”.

The New York dinner that launched Diner's Club was an event that changed our world, but never actually happened. Click To Tweet

This event was the legendary New York supper in 1949 in The Major’s Cabin Grill at 33 West 33rd Street, known to everyone in the business as the birth of the Diners’ Club card and therefore the modern payment card industry. The apocryphal version (as told here by Lana Swartz) is that lawyer Frank McNamara forgot his wallet and had to call his wife who drove into the city from Long Island with money for him to pay. Like everyone else, I’d seen this story in many places and had always assumed it to be true. But it turns out that this story was made up by Simmons, who had been hired as the first employee of McNamara’s nascent Diner’s Club! As Simmons later said, he had to “glamorize the creation of the credit card”. In reality, McNamara had had the idea some time before and spent months going around Manhattan with Simmons to try and drum up interest in the idea before eventually persuading  street to take the first payment by general-purpose charge card.

Think about the problem Simmons was faced with. An entirely new way to pay. The public had never seen a payment card and didn’t know what one was or why they might want one. Matty must have been a PR genius. Look at this fascinating newspaper report from “The Hartford Courant” dated 23rd October 1962. It concerns the world premiere of a movie called “ The Man From The Diners’ Club ”:

The Board of Selectmen unanimously adopted an ordinance Monday night to prohibit the use of money and place the entire town on credit for a day next March 13. Columbia Pictures “The Man From the Diners’ Club” will have its world premier at the Strand Theater here that day. On the day of the premiere, all transactions by local merchants will be by Diners’ Club cards only. The ordinance says it will be “unlawful for any person to pay cash for any article or goods purchased and it shall be unlawful for any merchant to accept cash for any article or goods sold.” Diners’ Club cards will be issued to the entire population of the town for the premiere day with junior cards for children.

What an amazing promotion! A cashless city in the USA half a century back! OK, so it was only for a day, but even so that was pretty cool. The Mayor of Hartford is reported as saying that “I am especially pleased to participate in this progressive experiment in the use of credit which may prove to the business world that the future method of transacting business will be through such a device as a single credit card” (my emphasis). What a forward looking guy!

Anyway, here’s the trailer for the film, which was written by William Blatty (who went on to write “The Exorcist”). The New York Times review said of Kaye that “his acting in it is so disordered, so frantic without being droll, so completely devoid of invention and spontaneity that he did no more than remind us, somewhat sadly, of that other Danny Kaye and what a terrible thing television has done to comedy on the screen”. 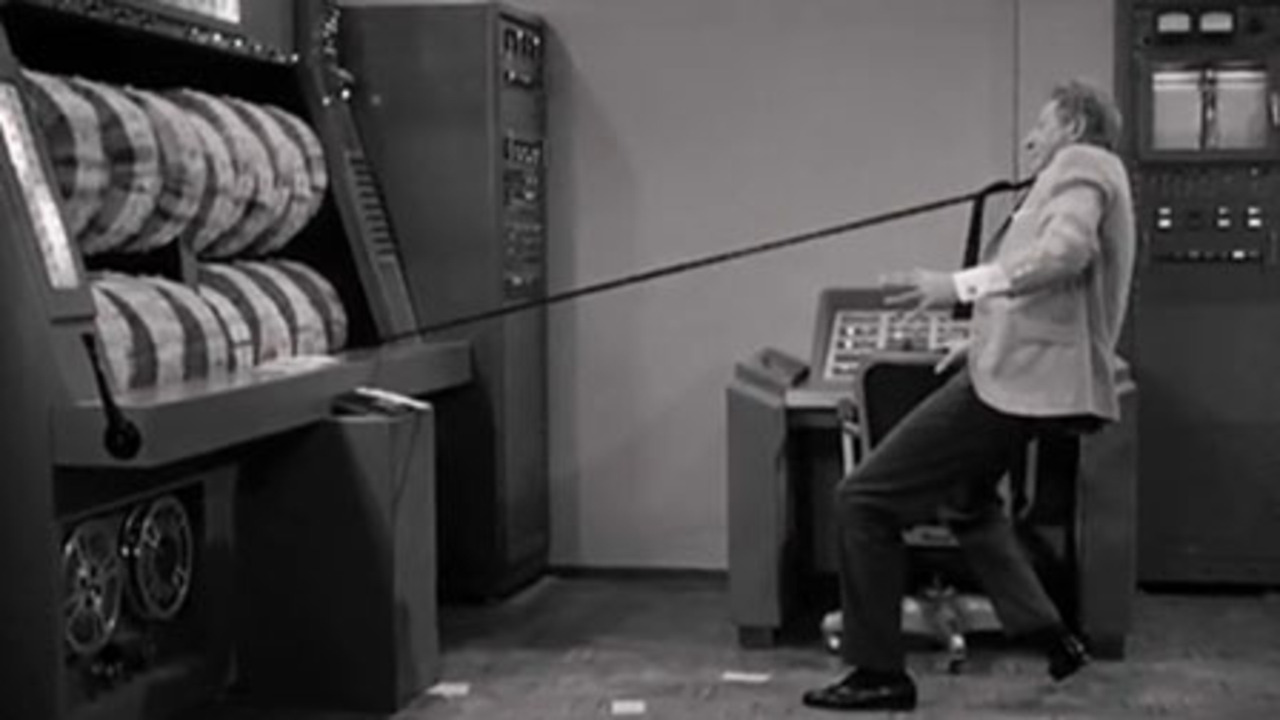 This picture of Danny illustrates an amazing item of payment trivia that Lana pointed out to me. Danny is shown clowning around in front of a computer that looks exactly as you would imagine in a film from 1963. But Diners’ Club didn’t have a computer, this was invented for the film. Simmons says that they did not go over to computers until 1968!

I watched the film so you don’t have to.

At several points the characters stop the action in order to explain how a Diners’ Club card works! So someone would say “now I’m going to phone Diners’ Club to check that this card is valid” and someone else would say “Hey the card comes with a booklet showing you all the places you can use it” or an incredulous supporting player would gasp when told that you could use a card to pay for an airline ticket. All a bit ham-fisted, but at least American consumers would come out of the movie understanding what a payment card does.

So where’s Bitoin Matty? Perhaps what the world of cryptocurrency needs is a movie featuring a popular comedian, much loved by the public (excluding me) for his clowning skills, who works for a cryptocurrency exchange and who, via a serious of hilarious incidents, explains what cryptocurrency is and why the general public should use it. Mr. Bean Gets REKT, perhaps, or Mrs. Brown’s HODL Boys. I’ve already thought up a few example incidents for my pitch to an actual film producer…

What do you think? Maybe that last one is little far-fetched, but I think I’m on to a winner. Remember, William Goldman’s first rule of Hollywood is “no-one knows anything” and that’s first rule of cryptocurrency markets as well.

[This is an edited version of an article that first appeared on Forbes, 15th June 2020.]