I was quoted in The Economist (“Plug and pay”, 21st November 2019) talking about the impending reshaping of the retail financial services sector. Although the quote isn’t quite accurate — I was responding to the statement that a a bank is a balance-sheet, a factory that turns capital into financial products (such as loans and mortgages) and a sales force, I didn’t make the statement — the paraphrase is correct. Those first two activities are heavily regulated, as they should be, which is why Big Tech is uninterested are in them. They are more than happy to have banks, for example, do this boring, expensive and risky work with all of the compliance headaches that come with it. As noted in article, the Apple credit card is actually issued by Goldman Sachs (although it was Apple that caught the flack in the row about gender discrimination around credit limits) and the Amazon cards are issued by Chase, Synchrony and American Express. Similarly, the Google “checking” account (this is the American word for a current account, because they still use cheques, which must be something to do with the Continental Congress or something) is actually provided by Citi. 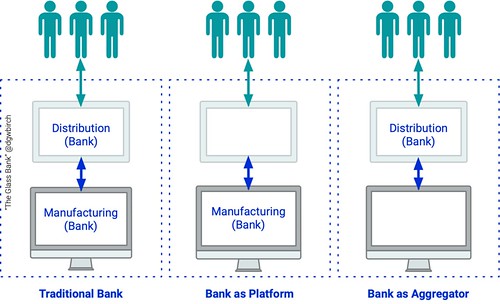 What big tech wants is the distribution side of the business, as shown in this old diagram of mine. They have no legacy infrastructure (eg, branches) so their costs are lower, but to my mind more importantly the provision of financial services will keep customers within their ecosystems. If you use the Google checking account and Google pay then Google will have a very accurate picture of your finances. As the article says “Amazon wants payments in-house so users never leave its app”. Indeed.

The business model here is very clear. What Big Tech wants isn’t your money (the margins on payments are going down) but your data. That’s why when people talk about “challengers” they should really be talking about Microsoft and not Monzo.

This is where there are some pretty serious implications. If Big Tech takes over consumer relationships, banks will end up having to give away margin but, far more seriously, data. Andrei Brasoveanu of Accel, a venture-capital firm, is quoted as saying that they could turn into “utilities, providing low-margin financial plumbing”. Well, that’s the lucky ones. The unlucky ones will be wiped out in a wave of consolidation and closures.

This isn’t a technology prediction, by the way. In Europe at least it is a regulatory prediction. Back in 2016, I wrote about regulators demanding that banks open up their APIs that “if this argument applies to banks, that they are required to open up their APIs because they have a special responsibility to society, then why shouldn’t this principle also apply to Facebook?”. My point was, I thought, rather obvious. If  regulators think that banks hoarding of customers’ data gives them an unfair advantage in the marketplace and undermines competition then why isn’t it true for other organisations in general and the “internet giants” in particular? This same point was just made by Ana Botin, Chairperson of Santander. My good friend Chris Skinner notes her comments to Bloomberg: “I need to know you and that’s based on data. Why should data be regulated in a different way if you’re called a bank and if you’re called something else”.

There are big changes coming, and banks and payment companies in particular are going to need effective strategies to survive. It’s not only a problem for those legacy incumbent dinosaurs that the happening new digital kids like to poke fun at. The fintech “challengers” also have a problem. Just as Big Tech has made ecosystems impervious to competition, so it could cross-subsidise (with data as well as with money) its financial services products to raise such a barrier to competition that no newcomer will be able to spend enough to gain traction.

There are some really big changes coming in retail financial services. And that’s not a prediction, that’s a fact.