As I wrote a while ago, the Chinese were first with the great transition from commodity money to paper money. They had the necessary technologies (you can’t have paper money without paper and you can’t do it at scale without printing) and, more importantly, they had the bureaucracy. In 1260, Kublai Khan became Emporer and determined that it was a burden to commerce and taxation to have all sorts of currencies in use, ranging from copper ‘cash’ to iron bars, to pearls to salt to specie, so he decided to implement a new currency. Then, as now, a new and growing economy needed a new kind of money to support trade and therefore prosperity. The Khan decided to replace copper, iron, commodity and specie cash with a paper currency. A paper currency! Imagine how crazy that must have sounded! Replacing physical, valuable stuff with bits of paper! Just as Marco Polo and other medieval travellers returned along the Silk Road breathless with astonishing tales of paper money, so commentators (e.g., me) began tumbling off of flights from Beijing and Shanghai with equally astonishing tales of a land of mobile payments, where paper money is vanishing and consumers pay for everything with smartphones. China is well on the way to becoming a cashless society, with the end of its thousand year experiment with paper money in sight. Already a significant proportion of the population rely wholly on mobile payments and carry no cash at all, much as I do when heading into London.

The natural step from here is to create digital currency so that settlement is in central bank money and there are no credit risks. Now, the People’s Bank of China (PBoC) is run by smart people and as you might imagine they have been looking at this strategy since back in 2014. It now looks as if Facebook’s Libra initiative has stimulated or accelerated their tactics. I read in Central Banking [PBoC sounds alarm over Facebook’s Libra] that PBoC officials had “voiced worries” that [Libra] could have destabilising effects on the financial system and further stated that the bank would step up its own efforts to create an e-currency.

This is no knee-jerk reaction. Way back in 2016, the then-Governor of PBoC, Zhou Xiaochuan, very clearly set out their thinking about digital currency, saying that “it is an irresistible trend that paper money will be replaced by new products and new technologies”. He went on to say that as a legal tender, digital currency should be issued by the central bank (my emphasis) and after noting that he thought it would take a decade or so for digital currency to completely replace cash in cash went to state clearly that “he has plans how to gradually phase out paper money”.

(As I have written before, I don’t think a “cashless society” means a society in which notes and coins are outlawed, but a society in which they are irrelevant. Under this definition the PBoC could easily achieve this goal for China.)

What would be the impact of phasing out paper money? Yao Qian, from the PBOC technology department wrote on this subject back in 2017, noting (as I have done) that a central bank digital currency (CBDC) would have some consequences for commercial banks, so that it might be better to keep those banks as part of the new monetary arrangement. He described what has been called the “two tier” approach, noting that to offset the shock to the current banking system imposed by an independent digital currency system (and to protect the investment made by commercial banks on infrastructure), it is possible to incorporate digital currency wallet attributes into the existing commercial bank account system “so that electronic currency and digital currency are managed under the same account“.

I understand the rationale completely. The Chinese central bank wants the efficiencies that come from having a digital currency but also understands the implications of removing the exorbitant privilege of money creation from the commercial banks. If the commercial banks cannot create money by creating credit, then they can only provide loans from their deposits. Imagine if Bitcoin were the only currency in the world: I’d still need to borrow a few of them to buy a new car, but since Barclays can’t create Bitcoins they can only lend me Bitcoins that they have taken in deposit from other people. Fair enough. But here, as in so many other things, China is a window into the future.

Whether you think CBDC is a good idea or not, you can see that it’s a big step to take and therefore understand the PBoC position. There is a significant potential problem with digital currency created by the central bank. If commercial banks lose deposits and the privilege of creating money, then their functionality and role in the economy is much reduced. We already see this happening because “Alipay, WeChat Wallet, and other Chinese third party payment platforms use financial incentives to encourage users to take money out of their bank accounts and temporarily store it on the platform itself” [China’s Future is Definitely Cashless].

In summary, then, a couple of year ago I wrote that the PBoC were not going to issue cryptocurrencies and they were not going to issue digital currencies either (at least in the foreseeable future). What I said was that what they might do is to allow commercial banks to create digital currency under central bank control. And this indeed what seems to be happening. According to the South China Morning Post, the new Chinese digital currency “would be centrally controlled by the PBoC, with commercial banks having to hold reserves at the central bank for assets valued in the digital yuan“.

How will this work? Well, you could have the central bank provide commercial banks with some sort of cryptographic doodah that would allow them swap electronic money for digital currency under the control of the central bank. Wait a moment, that reminds me of something… 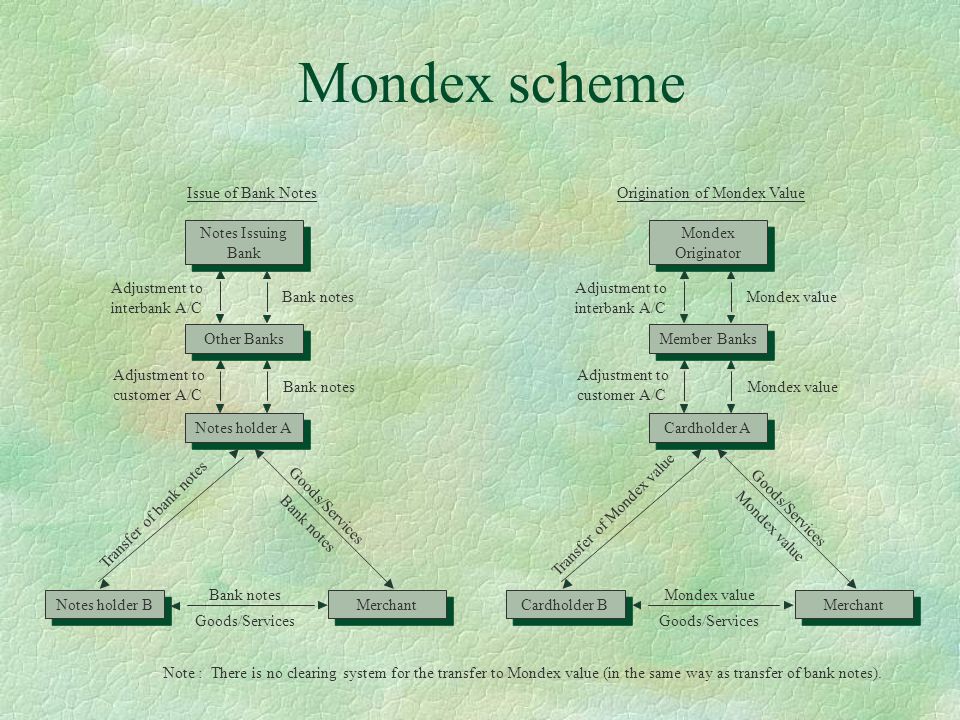 Yep, that’s how Mondex was structured 25 years ago. (If you don’t know what Mondex was, here’s something I wrote about it 20 years on.) There was one big different between Mondex and other electronic money schemes of the time, which was that Mondex would allow offline transfers, chip to chip, without bank (or central bank) intermediation. Would a central bank go for this today? Some form of digital cash that can be passed directly from person to person like Bitcoin rather than some form of electronic money like M-PESA, using hardware rather than proof of work to prevent double spending? Well, it was being tried in Uruguay, but I’m not sure how that pilot is going, although is was not quite the same thing as Mondex because the phones would not be exchanging fungible value but tokens that could ultimately be traced and tracked and monitored, but it’s interesting nonetheless. 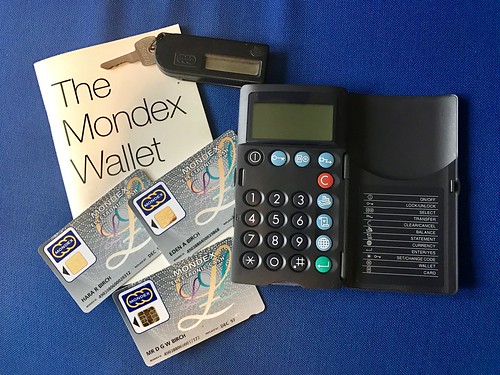 When I wrote about this back in 2018, I said that I thought it was unlikely that the PBoC would allow anonymous peer-to-peer transfers, so I was very surprised to see a Reuters report [6th September 2019] quoting Mu Changchun, deputy director of the PBoC’s payments department, saying about the proposed Chinese digital currency that “its ability to be used without an internet connection would also allow transactions to continue in situations in which communications have broken down, such as an earthquake”.

This would seem to mean that the system will allow offline transactions, which means that value can be transferred from one phone to another via local interfaces such as NFC or Bluetooth. If so, this would be truly radical. I wondered if something was mistranslated in the Reuter’s piece so I went to the source speech (albeit via Google Translate!) and I discovered that this is in fact precisely what he said. Talking about the project, which is called the DC/EP (digital currency and electronic payment) tool, he said that it is functionally “exactly the same as paper money, but it is just a digital form” and went on to confirm that

DC/EP can realize value transfer without an account. In the specific scenario, as long as there is a DC/EP digital wallet on the mobile phone, no network is needed, and as long as the two mobile phones touch each other, the transfer function can be realized… “Even Libra can’t do this,” Mu Changchun said”.

Wow. That’s huge. Libra can’t do it, and never will be able to. To understand why, note that there are basically two ways to transfer value between devices and keep the system secure against double-spending. You can do it in hardware (ie, Mondex or the Bank of Canada’s Mintchip) or you can do it in software. If you do it in software you either need a central databse (eg DigiCash) or a decentralised alternative (eg, blockchain). But if you use either of these, you need to be online. I don’t see how to get the offline functionality without hardware security.

If you do have hardware security and can go offline, then we are back to the question of fungibility again. Here the PBoCs principle is both clear and very surprising.

Mu Changchun said that the public has the need for anonymous payment, but today’s payment tools are closely tied to the traditional bank account system, can not meet the consumer’s anonymous payment needs, and can not completely replace the cash payment. The central bank’s digital currency can solve these problems. It can maintain the attributes and main value characteristics of cash and meet the demands of portability and anonymity.

Wow. They are serious. He goes on to say DC/EP will work the same way as banknotes.

Commercial banks open accounts at the central bank, paying 100% of the total amount, and individuals and businesses open digital wallets through commercial banks or commercial organizations. DC/EP is still replaced by M0 and is legally compensated. For users, just download an app to register, you can use a digital wallet, and recharge cash withdrawals need to dock traditional bank accounts.

I wonder if this will bring interoperability? If DC/EP is really to work as banknotes do then the e-RMB in my bank app and my Alipay app and my WeChat app much be interoperable. I must be able to transfer value from my Alipay app to your WeChat app. If PBoC crack that they will be on the way to one of the world’s most efficient electronic payment infrastructures.

There was a final part to the speech which I did not understand at all, so perhaps a Chinese correspondent more familiar with DC/EP can clarify the meaning. The speech covers “smart” “contract” by which I assume PBoC means apps that use the DC/EP to execute on the handset (since there is no blockchain), but this is my assumption.

I am baffled by this, which I am sure reflects my ignorace of advanced electronic money technologies, but I don’t think that this deflects from my overall observation that if the PBoC goes ahead and launches a person-to-person offline capable CBDC then that will be not only a nail in the coffin of cash but an event as significant and momentous in monetary history as the paper notes of the Khan a millennium ago.