(On 9th October 2016, Mr. Dowden gave written statement HCWS978 to Parliament, announcing that the government was going to stop funding GOV.UK Verify after 18 months with the private sector responsible for funding after that.)

Right now you can’t use a GOV.UK Verify identity provider to log into your bank or any other private sector service provider. But in his speech the Minister said that he looks forward to a time when people can use a single login to “access their state pension and the savings account”. This, in my opinion, is quite distinct from the single identifier that the Parliamentary Select Committee on Science and Technology called for in their report this week. The Right Honourable Norman Lamb MP, Chair of the Committee, observing that “the current digital service offered by the Government has lost momentum” called for the introduction of a single unique identifier for access to public services.

I have to say that I sort of agree with the Science and Technology Committee on the efficient delivery of public services as well as what the Minister said about a single login across both public and private services. Obviously you’d want the same login scheme but a different persona (an identifier plus credentials) for pensions, pornography and other purchases, but that’s a another issue and not the focus on this discussion. 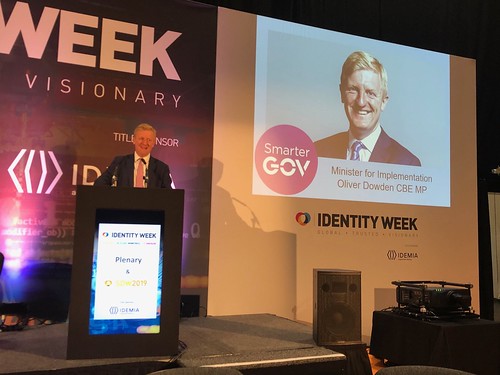 Back to the Minister’s point though. Yes, it would be nice to have some sort of ID app on my phone (I happen to sit on the advisory board of Biid, who provide just such an app) and it would be great if my bank and Her Majesty’s Revenue and Customs (HMRC) and Woking Council and LinkedIn would all let me log in with this ID. The interesting question is who will provide such a login given that the government does not seem able to. Put a pin in that and we’ll return to it later. Meanwhile, back to the Minister, who made three substantive points in his speech. He talked about:

Assuming that the GOV.UK Verify identities fail to gain traction in the private sector, then I think there are two obvious private sector coalitions that might step in to do this for the government: the big banks and the big techs.

For a variety of reasons, I hope that the big banks are able to come together to respond to the comments of Mark Carney, the Governor of the Bank of England, on the necessity for a digital identity in the finance sector Click To Tweet

For a variety of reasons, I hope that the big banks are able to come together to  respond to the comments of Mark Carney, the Governor of the Bank of England, on the necessity for a digital identity in the finance sector to work with the banks to develop some sort of financial services passport. I made some practical suggestions about this earlier in the year and have continued to discuss the concept with potential stakeholders. I think it stacks up, but we’ll have to see how things develop.

The reason why I’m so keen on this approach is that banks already do the hard work of establishing customer identities for know-your-customer (KYC) purposes but they don’t then do anything with it. So identity is a cost centre, when there is an opportunity for it to be a platform for new products and services. I’m not the only person who thought that the DCMS age verification legislation would be the trigger for a sophisticated federated privacy-enhancing bank-centric ID.

Well, whether it’s used for age verification or a pensions dashboard, I would have thought that what the European Commission Expert Group on Electronic Identification and Remote KYC Processes calls an “attribute-based LoA-rated KYC framework for the financial sector (ie, a financial services passport) would make a perfect post-Brexit stake-in-the-ground initiative to define the new era by boosting efficiency in the crucial Big Bank sector as well as providing a platform for new products and services for the Big Techs to develop. Talking of which…

I had the good fortune to attend more recent breakfast session with the Minister organised by the Cicero PR people. I have to say that the subject of digital identity came up more than once. There was considerable discussion (under the Chatham House rule) of both the priority of a UK digital identity infrastructure and the means by which it might come into existence. While I voiced my usual opinion that it should be the banks taking the lead, there were other people talking about alternative private sector providers.

It is clear, then, that if the banks can’t get it together then the big techs will  come knocking on the government’s door. I’ll readily admit that when the Minister said “private sector identities” in his speech, the first thought to flash across my brain was “Apple”. The public,  as well has civil servants in other departments who don’t really know or care about digital ID might be saying to themselves, “why can’t we just use ‘sign in with Apple’ to do our taxes?”, and this is a good point. Even if they are not saying it right now, they’ll be saying it soon as they get used to Apple’s mandate that all iOS apps that allow third-party sign-in must support it.

How would you use your Apple ID to log into HMRC? Easy: you log in as you do now after sending off for the password and waiting for it to come in the post and that sort of thing and then once you are connected tell them the Apple ID that you want to use in the future. If you want to be “jackdaniels@me.com” or whatever, it doesn’t matter. It’s just an identifier for the Revenue to recognise you. Then next time you go to log in to the Revenue, you log in as jackdaniels@me.com, something pops up on your iPhone and you put your thumb on it or look at it, and bingo you are logged in to fill out your PAYE without ever having to remember your taxpayer ID or government gateway passport ever again.

Incidentally, you could use this to log in at Pornhub too, because Apple have implemented a form of the persistent pseudonymity that I have long advocated as the core of a practical “privacy settlement”. So, as Wired magazine puts it, Apple’s universal login will let you hide your email address from third-party services. Unlike Facebook, Google and other services, Apple will randomly generate an email address on your behalf, and it then forward communications from the services that you sign up to on to your actual Apple ID address. I’m not joking about Apple delivering an infrastructure for the mass market instead of the government, it’s just that I thought that our forward-thinking innovation-centric banks would be the people to build on it. A couple of years ago I asked “Why doesn’t my bank put a token in my Apple Pay that doesn’t disclose my name or any other personal information… Keep my real identity safe in the vault, give me blank card to top shopping with”

The banks have a chance to to do this if the government, the Bank of England and industry bodies get together and work with them on it. But I wouldn’t be at all surprised to go over to the HMRC web site fairly soon to see “log in with Amazon” and “log in with Apple” next a button with some incomprehensible waffle about eIDAS that I, and most other normal consumers I’m sure, will simply ignore.

1 thought on “Digital identity in the UK – Will big banks or big techs deliver it?”