We’ve just had Bitcoin’s tenth birthday, so like most other electronic payment aficionados I’ve been mulling over the trajectory of the noted peer-to-peer electronic cash system. My interest in it goes back long way. I was  invited to speak to the first European Bitcoin conference in Prague back in 2011 having previously given perspectives on the project — in blogs, magazines and even on BBC radio — that were not especially enthusiastic. As an example, in Prospect Magazine back in 2011 I wrote “while many of us would like currency management taken away from governments, that doesn’t mean an unmanaged solution will be any better”.

That Prague conference was therefore an opportunity for me to learn more about Bitcoin and the Bitcoin community as well as to test my arguments with an informed crowd. My views didn’t change – I still didn’t think Bitcoin would crack the mass market – but looking back on it now is a fascinating slice of early Bitcoin life.

In the first presentation, Sergey Kurtsev from IMCEX said that anonymity is misunderstood and that the public don’t need it. I was upset about this, not because he was absolutely correct about it, but because it was going to be the subject of my talk in the afternoon. So it led to some emergency last-minute Keynote acrobatics on my part!

Amir Taaki from the Bitcoin Consultancy gave a presentation that was quite wide-ranging so I will use that presentation as a peg to hang a few comments on. He said, essentially, that there were three problems with Bitcoin: the marketplace, the technology and finance.

When it came to my talk (which you can see below), I did try to make constructive criticism. I tried to highlight some areas of commerce where the existing mass market solutions might be vulnerable to well-crafted alternatives (e.g., social networking, games, kids) or where a significant improvement in security would generate value.

Money the next generation from David Birch

( I also emphasis, as I recall, that any realistic mass-market solution must be mobile-centric.)

Overall, as I’d previously written, I was unconvinced that Bitcoin would make a good currency or scale into the mainstream economy, mainly because the anonymity that was the attractive feature to the early-adopting bitcoiners was not attractive to the mass market. I still don’t see any traction for Bitcoin in the mass market. Back in 2015, I set off to visit Swindon on the 20th anniversary of the launch of the UK Mondex scheme (an offline, smartcard-based form of electronic cash) and discovered a shop advertising that they accepted Bitcoin. But when I attempted to pay with Mr. Nakamoto’s peer-to-peer electronic cash system, no-one could remember the password and when I asked to speak to the manager, he told me that no customer had ever asked to pay with Bitcoin anyway. 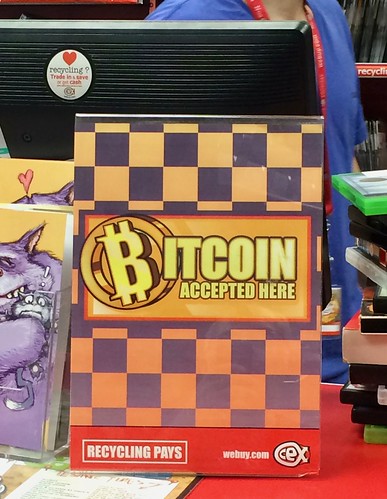 More interestingly, with the perspective of hindsight, a couple of the speakers at the event suggested creating a scheme on top of Bitcoin rather than use Bitcoin itself, which to my mind adumbrates the evolution of the token, which I do think has more chance of success. I wrote about this last year, saying that I see Bitcoin and its cousins not as prototypes but as a base layer that will be used by some, but not by most, people to make real transactions in the future. I think most transactions will take place at the token layer, exchanging bearer assets over an efficient (no clearing or settlement) transaction layer.

So the blockchain is new and so on… and yet… the idea of a trading “money like” instruments without clearing and settlement is hugely appealing. This not on idealogical grounds but on economic ones: it’s cheaper.

Whether the transaction layer underneath will be Bitcoin or not is anyone’s guess, although I suspect it will not. If the function of the transaction layer is to be a global, shared resource for security infrastructure then the protocol will surely need to be optimised in that direction and the operations will surely need to be organised in such a way as to prevent any well-funded (at the National State level) attacker from being able to control sufficient of the necessary resources to subvert or disrupt that infrastructure. No-one is going to move their stock market over to a platform where trading might be disrupted by crypto-kitties.