Having just been to China for Money2020 and having experienced at first hand the operation of a cashless society, I’ve even thinking (again) about the design of cash-replacement payment systems for a range of perspectives, using China as a case study. The first point to make is that people in China are well aware of what happens to when society switches from anonymous cash to not-anonymous (I can’t think of a suitable antonym) electronic payments. As observed in the Financial Times, “that scale of data accumulation is beyond our imagination”. The Chinese woman making this comment (while observing that despite her concerns about privacy, mobile payments are too convenient to opt out of) goes on to say (somewhat poetically, in my opinion) that she cannot tell whether her compatriots are “constructing a futurist society or a cage for ourselves”

Not everyone in China is part of this revolution, of course. The World Bank Global Findex database, which measures financial inclusion, estimates that as of lat year some some 200 million Chinese rural citizens remain unbanked, or outside of the formal financial system. As in Sweden, the shift toward cashless is raising issues around exclusion and marginalisation.

There are, for example, supermarkets with different lanes for cash or cashless payments that act as physical manifestation of social stratification between, as Foreign Policy notes, the young and the old and between the urban middle class and those left behind (between, as David Goodhart would put it, the “anywhere” and the “somewheres”). I’ve written before that we will see the same in the UK as cash vanishes from middle class life to become the preserve of the rich and the poor who will use it for tax evasion and budgeting respectively. A “Which” survey found that over 75% of low-income households rely on cash, as well as over 80% of elderly households. The shift to cashless society must be planned to help these groups so that they share in the benefits of cashlessness. 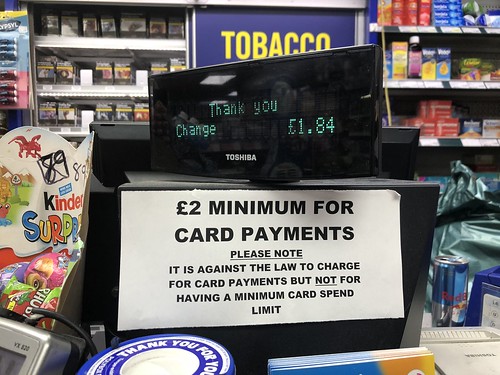 Cash is vanishing even in Woking.

I think we should start to plan for this now. In China, as in Sweden (where the New York Times observes that “cash is disappearing in the country faster than anyone thought it would“), we are beginning to see what happens to societies that slide into cashlessness. I am against this. That is, I am in favour of cashlessness, but I am in favour of it as a policy decision by society that is implemented to meet society’s goals. I couldn’t disagree more with the Wall Street Journal’s view that the move to cashless society “should be left to technological advancement”. No, it should not. This is a matter of great importance and with significant implications for society. The strategy should therefore be set by society, not by technologists.

Now, clearly, technological advances deliver new possibilities to policymakers and it is good for technologists to explore these possibilities. But, as they say, just because something can be done does not mean it should be done. We need a proper debate and a regulatory envelope set out to move forward. I wonder if we might seize the opportunity and set down a technological marker for post-Brexit Britain by declaring that cash will be irrelevant in the UK in a a decade. That is, anyone who needs to pay for anything will be able to do so electronically and that anyone who does not want to pay electronically will be presented with a method for paying in cash, albeit one that they have to pay for like (like cheques).

This must mean that in parallel we must set a national goal to provide a free at the point of use electronic payments infrastructure for everyone. Otherwise we’ll end up where they are in America, where jurisdictions are trying to ban cashlessness (and thus keep the cost of the payment system high, especially for the poor) in the name of social justice. In New York, Congressman Ritchie Torres has put forward proposals to force businesses to accept cash and called them a a “new frontier” of anti-discrimination law that is needed to prevent a “gentrification of the marketplace”. Similarly, as the Washington Post reports, lawmakers in the nation’s capital have introduced a similar bill. A council member there said that by refusing cash businesses are “effectively telling lower-income and younger patrons that they are not welcome”. Maybe, but if so it’s only because those demographics don’t spend enough to provide the margin needed to cover the cost of cash.

It’s time to start thinking about what the requirements for that infrastructure are and consulting consumer organisations, businesses and government departments on their needs. We need to make a cashless Britain, not simply allow a cashless Britain.