In my presentation to Seamless Payments in Australia, I made reference in passing to the nature of the Bitcoin universe and how informs thinking, so I thought I’d take the time to explore that thinking in a little more detail to explain my comments.

I don’t have the exact figures to hand, but as I understand it the Bitcoin coinbase breaks down roughly into thirds…

A third of them are lost (well, last year 23% but I think it will get worse as more people forget their passwords). This is because (like me) someone wiped their old phone wallet away and forgot to transfer it over to their new phone wallet first or because they accidentally threw away the old hard disk with all the Bitcoins on them or because the dog ate the Bicoin cold wallet or because they died or whatever. As Jonathan Levin of Chainalysis, who I regard as the “go to guy” for tracing Bitcoins, told NPR in January: “For the people that have lost their bitcoins, I say tough luck”.

(These lost Bitcoins, as my good friend Steve Bowbrick rather eloquently observed, are like treasure in sunken galleons waiting to be discovered by an intrepid explorer in the very latest kind of submarine. Which, in this instance, would be a quantum computer. It’s not only Bitcoin tucked away in these sunken galleons, by the way. There’s half a billion dollars in Ethereum stuck in just one Ethereum address: it’s the address “0”, essentially. In July 2016 someone accidentally sent ETH 1,493, currently worth more than a million dollars to that address. And thanks to the magic of the cryptography, it will stay there until the quantum submarine can uncover it.)

Another third of the Bitcoins are in the hands of the .0001%, the cryptoscenti. Bloomberg estimated that a few hundred people at most own these Bitcoins, but I’ve heard estimates that fewer than 50 people have the lion’s share. These are the people who have every interest in driving the value of Bitcoin higher so that they can cash out at a steady rate. If they dump their coins, that will drive the price down (a row has just been going on about the sale of the Mt. Gox assets for this very reason), so they need a rising market where they can convert Bitcoin to one Lambourghini at a time.

Meanwhile the other millions of Bitcoin peasants scrabble for their share of the remaining third. This distribution makes America look like a kibbutz in comparison and stands testimony to the deranged nature of utopian projections around this “digital gold” for the masses. So, to get to the question that I was asked on Sky News a few weeks ago, what does the Bitcoin market tell us about the future of money?

I’m not sure that the state of Bitcoin, or indeed the history of Bitcoin, tells us very much about the future of Bitcoin or money. It’s not anonymous enough for criminal enterprise on a large scale (and there is every evidence that criminals are turning to crypto alternatives) and it’s not functional enough to be a mass-market medium of exchange. If it is to remain a store of value beyond speculation then it must be useful for something and I’m at a loss as to what that something might be, although I’m perfectly prepared to believe that it’s because I grew up in an era of chip and PIN cards and ApplePay.

Does that mean that we should ignore it? No, of course not. There are many different ways to look at Bitcoin and it deserves study as a much as a social and political phenomenon as it does as a technological and economic one. What’s more, it does tell us something about the future. In yesterday’s Financial Times, Benoît Cœuré and Jacqueline Loh from the Bank for International Settlements (BIS) said that “while bitcoin and its cousins are something of a mirage, they might be an early sign of change, just as Palm Pilots paved the way for today’s smartphones“.

I agree, but in a slightly different way. I see Bitcoin and its cousins not as prototypes but as a base layer — as shown in this “thinking out loud” picture that I’ve been using to explore these ideas — that will be used by some, but not by most, people to make real transactions in the future. I think most transactions will take place at the token layer, exchanging bearer assets over an efficient (no clearing or settlement) transaction layer. And most of those transactions will be pseudonymous, but some will be linked through accounts to people and organisations. 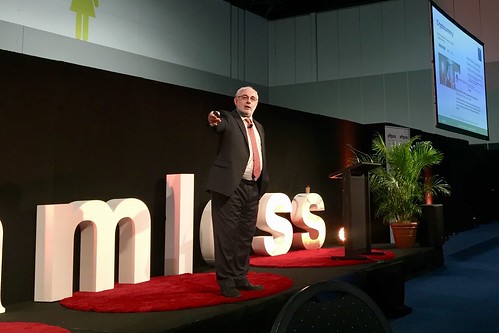 So what can we guess about the future of money, given what we have learned so far? Well, as I said in my Seamless Payments presentation what we may have learned is that the token economy is a more accurate pointer toward the future of money than the underlying cryptocurrencies are, because the tokens link the values managed on shared ledgers to the “real world”. There’s a logic to this model of “the blockchain” as the security infrastructure for a token economy and I really enjoyed engaging with the good people of Sydney on this view of the emerging cryptoeconomy.