In her excellent book Stuff and Money in the Time of the French Revolution, Rebecca Spang cautions against using the story of the attempted reinvention of money following the French Revolution as part of a superficial “transition to capitalism” narrative, but as a non-historian it did seem to me that there is something for today in comparing the evolution of money in industrialising Britain and the evolution of money in revolutionary France. To me, it is a contrast between British mercantile pragmatism to exploit bottom-up innovation with French idealism and top-down change, which is why I included a discussion of the assignats in my book “Before Babylon, Beyond Bitcoin”. All of which explains why I was intrigued by Tuur Demeester’s reference to assignats as the “first ICO”.


Now, in this context, I would probably have awarded the title of first ICO to John Law’s notorious Banque Royal (see “The Mississippi Bubble) but Tuur makes in interesting point which is worth reflection. How did the assignats come about?

In pre-revolutionary France it was the monarch’s prerogative to set the exchange rate between the money of account (livre) and the money of reckoning (the coins, such as the ecus). Rebecca notes that in the last 26 years of Louis XIV’s reign, this exchange rate changed 43 times! There was actually very little of this money out in the real economy because pre-revolutionary France was, as pre-industrial England had been, a reputation economy. The great majority of the population engaged in commercial activities with well-known and trusted counterparties. Buying and selling was done “on tick” as people maintained a web of credit relationships for periodic reckoning.

In an economy based on trust and once that trust fails (or fails to scale), the substitute of money is required to oil the wheels of commerce. This is exactly what happened in France where after the revolutio, a lack of trust in the state quickly became a shortage of credit in the marketplace and therefore an immediate demand for a circulating medium of exchange.

But from where? France did not have a central bank along the lines of the Bank of England, so one of the first acts of the new revolutionary government was to take over Church lands and use them as security to issue interest-bearing bonds with the redemption in portion of the land itself. Were the blockchain available to them, I am certain that Robespierre and the other would have certainly gone down the Venezuelan route and gone with an ERC-20 token in an ICO, but they were restricted to the technology of the time and thus the paper assignats were created. 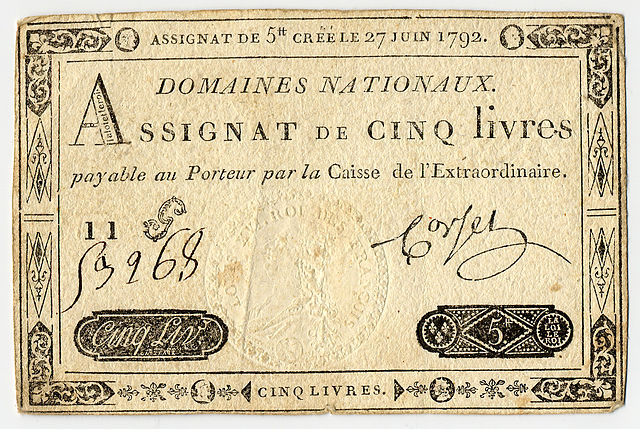 They didn’t last that long. The interest and redemption were soon abandoned and the notes, the assignats, simply became state-issued inconvertible fiduciary notes. There followed what Professor Glynn Davies called in his magisterial History of Money from Ancient Times to the Present Day “the usual consequences”: inflation, dual-pricing (with note payers forced to give more than coin payers), hoarding and (Gresham’s Law again) the practical disappearance of coins as capital fled across international borders. By October 1795, 100 Franc assignats could be traded for only 15 sous in coin and the Paris riots of the time opened the door for Napoleon. It wasn’t until the Bank of France was founded in 1800 that the nation at last enjoyed the same kind of public institution that England, Holland and Sweden had had for more than a century.

There seems to me a useful comparison to made between those revolutionary times and ours. If we expect the state to come up with some grand plan to reinvent a money de nos jours, we run the risk of it going hopelessly wrong. If we leave a regulatory space for the merchants to play in, they may well come up a better idea.

Why am I so interested in these long-gone Latin precursors of the Euro? Well, Rebecca notes that when the assignats wentinto circulation, people treated the new paper currency as the bills of exchange that they were familiar with. They did not value the anonymity of the notes at all. In fact, they signed them as they passed them around. Who had used a note attested to its validity and the identity of the previous holders gave the notes value! A note signed by a trustworthy person such as Joanna Lumley or Sergio Aquero would be worth more than one signed by me, for example. For the citizens, fungibility was not all that.

Or, to look at it from a modern perspective, the new money was identity.

1 thought on “The first ICO, or “unstable coin” as it might well have been called”