According to The Daily Telegraph, the Bank of England “could green light its own Bitcoin-style digital currency”. I’m pretty sure that the Bank of England would never use “green light” as verb in any context, but putting that to one side, I was left wondering what they mean by a “Bitcoin-style” digital currency since this is not made clear in the article.  “Bitcoin-style” means what? Uncensorable? Mined in China? 7 transactions per second? High transactions fees? Using more electricity than Poland? Oh wait…

What that article actually says is that a research unit set up by the Bank was investigating the possible introduction of “a crypto-currency linked to sterling”. So not a digital currency, a crypto-currency. That presumably means that the value will be determined by mathematics, not by the Bank of England. Now it all makes sense, except that I cannot imagine why the Bank of England would want to give-up control of Sterling. Oh wait…

Further down, the article says that “a virtual currency issued by the bank” might lead to a revolutionary shake up of high street banking. Ah, now I get it. It will be a virtual currency only used in the internet tubes and not for mundane transactions. This could make sense – a sort of Bank of England “stablecoin” used to reduce friction in online transactions.

It’s all a bit confusing this future of currency stuff, so here’s a handy table I made last year to clarify the differences. 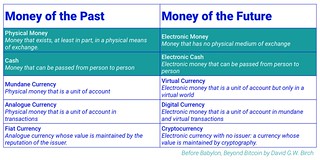 I suspect that the Telegraph’s confusion may have arisen because of the tendency amongst management consultants (and others) to conflate the two entirely different kinds of electronic money: a cryptocurrency and a digital currency are very different things. If Mr. Carney were genuinely suggesting that one of the scenarios under consideration by the Bank of England is that it abandons its responsibility for managing the creation of money and instead turns to a cryptocurrency, even if it is a cryptocurrency that is produced as a by-product of a double-permissionless shared ledger spawned by the Bank of England itself, then the value of that currency would not only be beyond political control it would be beyond the Bank’s control and one might imagine the Bank to be somewhat redundant in such circumstances.

On the other hand if Mr. Carney were genuinely suggesting that one of the scenarios under consideration by the Bank of England is that it creates a digital currency, then I say more power to him. A digital currency platform with right APIs in place (providing risk-free, genuinely instant and zero-cost transfers between accounts with final settlement in central bank balances) would be an amazing platform for a Digital Britain. I’d trust the Bank to maintain a Sterling reserve against the digital currency.

Right now, money reaches the public through commercial banks, a practical structure that stems from the retail banks role in providing payment services, but that privileged role is under attack. I might further observe that not only is there no fundamental economic reason why banks should be the dominant providers of payment services, there is no fundamental economic reason why they provide them at all — see, for example, Radecki, L., “Banks’ Payments-Driven Revenues” in “Federal Reserve Bank of New York Economic Policy Review”, no.62, p.53-70 (Jul. 1999) — and there are many very good reasons for separating the crucial economic function of running a payment system to support a modern economy and other banking functions that may involve systemic risk (eg, providing credit).

Marilyne Tolle made this point very clearly a couple of years ago, writing in the Bank of England’s “Bank Underground” that  “the conflation of broad and base money, and the separation of credit and money, would allow the [central bank] to control the money supply directly and independently of credit creation”. You can’t ignore that impact that such a digital currency would have on the commercial banks. Back in 2016, the management consultancy McKinsey said that global payment revenues would be $2 trillion in 2020 and that these payment revenues account for around 40% of global bank revenues! So if payments go away because the central bank provides free, instant transfers between personal accounts, then banks would have to think of something else to do instead.

There’s a good reason why this won’t happen, though, irrespective of bank executives lobbying power and that is that the central bank doesn’t want to do KYC on millions of people, run authentication platforms, perform AML checks, manage black lists and all the rest of it. So here’s a practical suggestion to suit both. Maybe, just like Bitcoin, the central bank could manage accounts that are pseudonymous. The central bank would know that account no. 123456789 belongs to a retail consumer, but not which consumer. It would know that account no. 987654321 belongs to a retailer, but not which retailer. This way the central bank could generate a dashboard of economic activity for the Chancellor to look at when he wakes up in the morning, but not routinely monitor what you or I are up to.

It would be the commercial banks who provide the services linking the pseudonymous accounts to the “real” world (and get paid for doing so). In this construct, your Sterling bank account would just be a pass-through API to a central bank digital currency account (what Marilyne calls the “CBCoin Account”) because my Barclays current account and your Lloyds current account are just skins on the Bank of England instant, free, no-risk Sterling platform (I suggest “BritCoin” as the brand) and the commercial banks can chuck away their legacy retail payment systems and focus on delivering services that add real value instead.

Commercial banks will then have an important, useful and distinct function in society as the vaults that look after identity, not money. I wasn’t the first person to say that identity is the new money, although I may have been the most persistent and annoying, but as time passes it seems to be a more and more accurate description of the future. I imagine that most forward-looking banks already have a digital identity strategy in place and are already developing new products and services to take advantage of this new era, but for those who don’t I’ll post a few ideas on the topic here.