Well, that was fun. I had the great honour of being invited on to a panel at the Festival of Economics, part of the Bristol Festival of Ideas. I’d never been to the festival before, but I really enjoyed it. It’s a very impressive event, and I’m not just saying that because my publisher, Diane Coyle, founded it. What I found especially impressive, apart from the sheer size of the audiences at the sessions I attended, was that the festival seemed to achieve its goal of bringing serious discussion of important topics to the general public. In our session we have a great audience and they gave us a wide variety of topics to deal with in the Q&A. All in all, an excellent event. 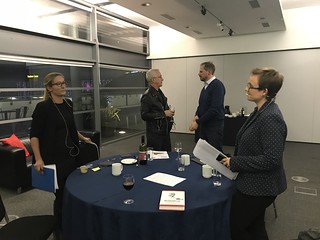 I was talking about the future of money with Professor Steve Keen, Daniela Gabor, Tatiana Cutts and stand-in chair Romesh Vaitilingam who did a great job moving things along. I’m pleased to say that the session was lively and well-attended.

We’re pleased to be supporting #economicsfest here in Bristol. Standing room only for this evening’s session, The Future of Money. pic.twitter.com/puM1r83lli — RoyalEconomicSociety (@RoyalEconSoc)

One of the topics that came up, naturally, was whether Bitcoin was a form of cash or not. Remember that US IRS Ruling about Bitcoins being a commodity, so that traders would have to track the buying and selling price of each individual Bitcoin in order to assess their tax liability? No? Here’s a reminder: “the real lesson from the IRS Bitcoin ruling is that for a currency—or any payment system—to work, its units must be completely fungible”. Now, fungible (from the Latin “to enjoy”) is a great word. One of my favourite words, in fact. In this context (ie, money) it means that all of the tokens are the same and can be substituted one for another. You owe me a pound. It doesn’t matter _which_ pound coin that you give me. Any will do. Any pound coin can substitute for any other pound coin because they are all the same: no-one can distinguish one pound coin from another. This isn’t true of Bitcoins. They are all different, and because they are all different, their history can be tracked through the blockchain. As the MIT Technology Review pointed out, while Bitcoin has a media reputation for providing privacy, analysis of the blockchain suggests it could be surprisingly easy for a law enforcement agency to identify many users of the currency. Actually, recent analysis of the blockchain provides much other interesting information, including the fact that around a quarter to a fifth of the bitcoins already mined are lost for good.

The idea of money that isn’t fungible but that can be tracked, traced and monitored reminded me of Nitipak Samsen’s winning entry in the Consult Hyperion 2011 Future of Money Design Award, an example that I include in my book. I used it to make the general point that if you want to look into the future you need to listen to artists as well as technologist. Anyway, I mentioned the Award on stage and a couple of people came up afterwards to ask more about this particular entry and the competition in general, so if you are one of them and you’d like to learn more, check it out here.

Have you ever wondered where the money in your pocket had come from? Who was the previous owner? Who was the owner before that? Might it be a famous celebrity?…

[From Money Trailer – Future of Money]

It is interesting to me to see these different perspectives (Nitipak’s artistic imagination about the bastard child of Facebook and Bitcoin, and the more technical ideas about fungibility) coming together and, to my mind, again illustrates just why the FOM Design Award became such a popular session at Consult Hyperion’s Tomorrow’s Transactions Forum. We (technologists) need artists to help us to imagine alternative futures.

Bitcoin isn’t cash, because cash is fungible. If we want something to be cash, we need to make it fungible. But do we want cash? I’m always ready to listen to informed views, but right now my general feeling is that the costs outweigh the benefits.