A few years ago, I took part in an entertaining event at the British Computer Society (BCS) during which my alter ego, Mr. Don Rogers from the Isle of Man Economic College, set out a new payment system. During this talk (you can see the video here), Mr. Rogers proposed the “Crime Pays System” or CPS. Under this system, digital payments would be either “light” or “dark”. The default transaction type would be light and free to the end users. All transaction histories would be uploaded to a public space (we were, of course, thinking about the Bitcoin blockchain here) which would allow anybody anywhere to view the transaction details. This “Light Exchange” is designed to promote an environment of social accountability. The alternative transaction type would be dark. With this option advanced cryptographic techniques would make the payment completely invisible, leaving no trace of the exchange, thus anonymising all transactions. A small levy in the region of 10% to 20% would be paid per transaction. The “Dark Exchange” would therefore offer privacy for your finances at a reasonable price. The revenue generated from the use of this system would be taken by the government to substitute for the loss of taxes in the dark economy.

Pretty whacky, way-out, left-field thinking, yes? Well, I must in all honesty admit that it was not my idea. Like all such concepts way ahead of their time, it has its origins in art, not technology. The idea came from my good friend and wonderful artist, Austin Houldsworth. As you may know, for many years Consult Hyperion ran the Future of Money Design Award as part of the annual Tomorrow’s Transactions Forum. Austin organised this award and he also designed the cover for my book Before Babylon, Beyond Bitcoin. In fact, here he is showing me the machine that he built for the cover photo of the book. 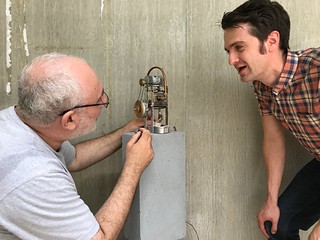 Well, it’s taken a few years, but Austin’s idea is a few steps closer to reality, since Coin Telegraph reported that just such a payment system is being proposed for Russia. And our guess of a 10-20 percent holding tax was remarkably accurate, since what is being proposed in Russia is apparently a 13% tax.

That’s pretty amazing if you ask me, but it does illustrate a general point about futurology, which is that sometimes the technologist’s roadmap can be a less accurate guidebook than artists’ imaginations.

Whether we achieve a mostly cashless society sooner or later should be left to technological advancement.

From Should We Move to a Mostly Cashless Society? – WSJ

No, it shouldn’t. This is a matter of great importance and with significant implications for society. The strategy should be set by society, not by technologists. And we need to make some big decisions about it fairly soon, otherwise we will allow technology (that is, technology companies) to create an environment that we may not be comfortable with. What might that environment be? Well, it won’t be like 1984 (for one thing, we didn’t need the government to come around an install screens to watch us all the time, we bought them ourselves from Apple and Samsung and Google). I don’t think it will be like Star Trek either, partly because of the physics and partly because of the money-free utopianism. I think it will be more like the future set out a few decades ago by the “cypherpunk” writers who predate the internet and social media but saw which way the wind was blowing. I’m not the only one who thinks that “we are, roughly, living in the world the cyberpunks envisioned”.

There’s a nostalgia around that word cypherpunk for me, because it’s now many years back I saw these visions and was captivated by them. A quarter of a century ago, my Consult Hyperion colleague Peter Buck and I wrote an article for the “Computer Law and Security Report” (Volume 8, Issue 2, March–April 1992, Pages 74-76), asking whether William Gibson’s work was science fiction or informed prediction (clearly, we thought it was the latter). The article (called “What is Cyberspace” [Ref] [PDF]), which tried to explain the idea of cyberspace to a lay audience (this was before Netscape, the year zero of the modern age, so most lawyers had never been online), turned out to be rather popular. I like to think that one of the reasons was the conviction that we were exploring the actual future, not a hypothetical future. I can’t remember where the idea of the paper came from, but I do remember that we chose extracts from Gibson’s brilliant writing to illustrate the concepts rather than trying to paraphrase, and I still get a thrill from reading them now.

That’s king hell ice, Case, black as the grave and slick as glass. Fry your brains as soon as look at you

[From “What is Cyberspace?”]

I loved the idea of the “black ice” then and I love it now. In the Gibson world, Intrusion Countermeasures Electronics (ICE) refers to security software that protects data form unauthorised access, and black ice is ICE so deadly that it can kill a hacker. Wonderful. It came back to me a couple of years ago when I turned on BBC radio at random while driving home, only to discover that someone was reading one of my all-time favourite books, Gibson’s “Burning Chrome”, and the mention of the black ice gave me that chill all over again.

Writing this blog post I can still remember the shock of reading Gibson’s 1984 masterpiece “Neuromancer” for the first time. (Gibson later called this work an optimistic view of the near future because it assumes only limited nuclear exchanges between countries – let’s hope he’s right.) Why was it such a shock? Well, since leaving university I’d found myself specialising in secure data communications. I worked on one of the first secure LANs for the UK government, on secure satellite communications for banking, on secure military networks for NATO, that sort of thing. I understood computer networks, but I didn’t grok them. I didn’t feel what it meant, where it was taking us.

Reading Gibson back then was like lifting a veil from parts of my own brain. I took an artist to give me vision and vocabulary. And what a vocabulary it was. My very favourite William Gibson quote, right after “the future is already here, it’s just unevenly distributed” is about money. It comes from his novel “Count Zero” and it’s about the cashless society. I re-use it shamelessly in presentation after presentation.

He had his cash money, but you couldn’t pay for food with that. It wasn’t actually illegal to have the stuff, it was just that nobody ever did anything legitimate with it. 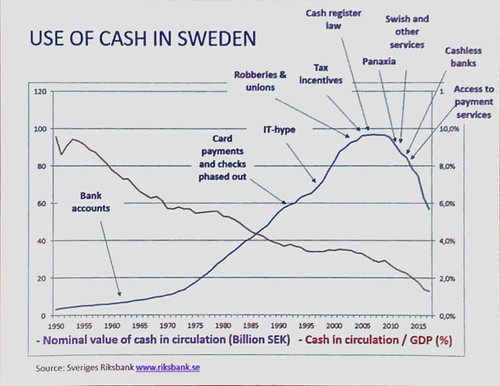 As I’ve written before, we are heading toward a cashless society, cashless in this Count Zero sense, where cash will still be around and it will still be legal tender (although I don’t think people understand what a limited concept that is), but it will disappear from polite society and from the daily lives of most people. This vision of a cashless society, not a society where there is not no cash but a society where cash is irrelevant, may have seemed outlandish twenty five years ago, but it’s a pretty accurate description of Sweden now (where only a tiny fraction of retail payments are cash)  and China soon. The future is less unevenly distributed than it was even a decade ago.

[An edited version of this piece was posted to Medium, 16th October 2017].