My little corner of the internet seems awash with tales of a mythical utopia that goes by the name of Estonia. Since my little corner is the digital identity corner, I’ve been hearing about digital identity in Estonia more and more. At meetings and conferences, on social media and in conversation, I hear people talking about the Estonian national identity scheme that uses a blockchain. The Harvard Business Review, for example, tells us that “since 2007 Estonia has been operating a universal national digital identity scheme using blockchain”. This sort of thing crops up on Twitter from time to time. I’m not sure if some of the people tweeting about the Estonian national digital identity blockchain know that Estonia is actually a real place and that some people (e.g., me) have been there. In fact, here is a picture of me in Tallin to prove it. 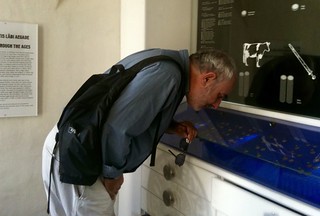 The Estonian national digital ID scheme launched in 2002. A decade ago a colleague of mine at Consult Hyperion, Margaret Ford, interviewed Mart Parve from the Estonian “Look@World” Foundation in the long standing “Tomorrow’s Transactions” podcast series (available here). Mart was responsible for using the smart ID service (both online and offline) to help Estonia develop its e-society. If you listen carefully to them talking, you will notice that they never mention the blockchain, which is unsurprising since Satoshi’s Nakamoto’s paper on the subject was not published until more than a year later, in October 2008.

The strangeness of the obsession with Estonia in blockchain circles began to bother me after I was invited along to a blockchain breakfast (seriously) at the House of Lords last year. The invitation came because I had been asked to contribute to the Parliamentary Office of Science and Technology (POST) work on distributed ledger and the purpose of the breakfast was to discuss this report. The breakfast was hosted by Stephen Metcalfe MP, chair of the Science and Technology Committee. Sir Mark Walport, the Government’s Chief Scientific Adviser (GCSA), opened the proceedings. Sir Mark had authored the Government Office for Science report on “Distributed Ledger Technology: beyond blockchain” earlier in the year. In it, he focused on a particular kind of distributed ledger, the Bitcoin blockchain, and attempted to explain it to the general reader and then explore some of the potential uses.

(From here on I insist to sticking to the term that Richard Brown of R3 and I started using a couple of years ago “shared ledger technology” (SLT) as the general description because I feel that the fact that multiple organisations share the ledger is more important than its architecture.)

Personally, I found the report slightly confusing because it was jumping between ledgers, blockchains, the bitcoin blockchain and bitcoin almost on a paragraph by paragraph basis. What’s more, and I realise that I read the document from a very technical perspective and that I may see some of these things therefore in the wrong context, I think the report might have benefited from some more description of shared ledgers, and the reasons why Moore’s Law and falling communications costs have made the core idea of everyone storing every transaction a plausible architecture. Here’s the way that my colleagues at Consult Hyperion and I started to think about the ledger a couple of years ago, the “4Cs” model that has worked rather well. 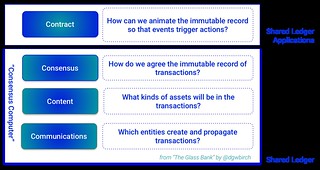 I prefer to use this layered approach to explain the key components of a shared ledger and then develop ideas around different choices in those layers. Different choices in consensus technology, for example, lead to a variety of different possibilities for implementing a shared ledger. In order to help categorise these possibilities, and narrow them down to make useful discussions between the strategists and technologists, I use the taxonomy that Consult Hyperion developed to distinguish between different kinds of public and private ledgers. Rather flatteringly, Sir Mark used a simplified version of the this model on page 19 of his report.

When the report came out I said that it might be considered reckless to disagree with the GCSA, but I just did not (and do not) see cryptocurrency as a sensible government option for digital currency. Anyway putting my nerdy criticisms to one side, Sir Mark’s conclusions (which were essentially that the technology is worth exploring in government contexts) were surely correct. He said that permissioned ledgers (i.e., not the Bitcoin blockchain) are appealing for government applications and I’m sure he was right about this, although I remain sceptical about some of the suggested government uses that are based on costs or efficiency. I think that his suggestions around applications that focus on transparency are the more interesting areas to explore in the short term and they would be my focus if I were looking to start exploratory or pilot projects in the field. I share the Open Data Institute’s view on this, which is that blockchains could be used to build confidence in government services, through public auditability. 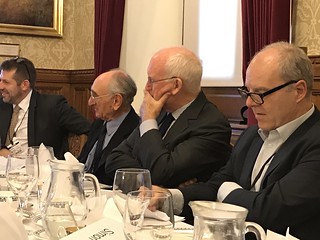 When it came time for my contribution, by the way, I said that it wasn’t at all clear to me that it was accurate to describe Bitcoin as a decentralised system since almost all of the hashing power resides with a very small number of unaccountable mining pools based in China but, more importantly that

At the breakfast, Sir Mark said that the goal of the POST reports is to demystify technology for policy makers although I have to report that in his closing remarks he said that we had not been entirely successful in this enterprise and I fully concur with his opinion. That’s not why I’m talking about it breakfast at the House of Lords here though. Back to Estonia! At one point, the breakfast discussion moved on to the Estonian electronic identity system. At this point I expressed some scepticism as to whether the Estonian electronic identity system was on a blockchain. The conversation continued on the basis that it was. Then to my shame I lost it and began babbling “it’s not a blockchain” until the chairman, in an appropriate, gentlemanly and parliamentary, told me to shut up.

The point that I was trying to make was that the Estonian ID scheme, launched in 2002, has nothing to do with shared ledgers or mutual distributed ledgers or blockchains. As it happens, a some time after my breakfast with their lordships, I had another breakfast, this time with the new CIO of Estonia, Siim Sikkut. 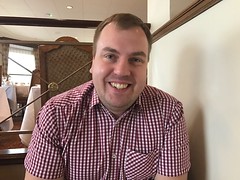 I asked Siim where this “Estonian blockchain ID” myth came from, since I find it absolutely baffling that this urban legend has obtained such traction.  He said that it might be something to do with people misunderstanding the use of hashes to protect the integrity of data in the Estonian system. Aha! Then I remembered something… More than decade ago I edited the book “Digital Identity Management” and Taarvi Martens (one of the architects of the Estonian scheme) was kind enough submit a case study for it. Here is an extract from that very case study:

Long-time validity of these [digitally-signed] documents is secured by logging of issued validity confirmations by the Validation Authority. This log is cryptographically secured by one-way hash-function and newspaper-publication to prevent back-dating and carefully backed up to preserve digital history of mankind.

Well, there we have it. It looks as if the mention of the record of document hashes has triggered an inappropriate correlation amongst observers and, as Siim observed, it may indeed be the origin of the fake news about Estonia’s non-existent digital identity blockchain.

(This is a revised and edited version of post that first appeared on Consult Hyperion’s “Tomorrow’s Transactions” blog in March 2017.)