In our United Kingdom, the value of currency in circulation has dropped, year on year, for seven consecutive months (see chart), for the first time since records began in the 1960s. This is something of a surprise. For many, many years the use of cash for purposes such as shopping has been steadily decreasing while the amount of cash “in circulation” has been steadily increasing. Broadly speaking, the use of cash for legitimate activities has been falling while the use of cash for drug dealing, money laundering, tax evasion, payments to corrupt officials and so on has been rising. Hence my surprise at this shift in the statistics.

Of that cash that is “in circulation”, the £16.5 billion in £50 notes is particularly puzzling. Earlier this year the Treasury said that £50 notes were “rarely used” for routine transactions and that “there is also a perception among some that £50 notes are used for money laundering, hidden economy activity, and tax evasion”. I’ll say. This perception is widespread, by the way. A couple of years ago Peter Sands, the former head of Standard Chartered, said that the main use of the £50 was illicit and he’s a banker not a mere blogger such as myself.

Given this perception, I would have thought that is was time for the Treasury to tell the Bank of England to stop making life easy for criminals and withdraw the £50 over a two year period. But apparently not. Given that no-one is using them for legitimate purposes, the Bank of England has decided that now is a good time to bring the £50 up to date and make it out of plastic. Robert Jenrick, exchequer secretary to the Treasury, explained the decision by saying that “people should have as much choice as possible when it comes to their money and we’re making sure that cash is here to stay” although I don’t think anyone in the Treasury or anywhere else was asking for cash to be removed from circulation, only for a narrowing of the spectrum (dumping 1p and 2p coins, two-thirds of which are only used once, and removing £50 notes leaving the £20 as the highest denomination).

Oh well. I suppose tax evaders are more of an electoral force than I thought. According to the HMRC’s latest estimates that are shown the chart below (for 2016/2017), almost half of the tax gap is down to small businesses and they account for nearly three times as much of the missing tax as “criminals”. I’m not sure if these groups are natural Conservative voters, but they must in some measure account for the governments reluctance to inconvenience those responsible for the lion’s share of missing taxes. 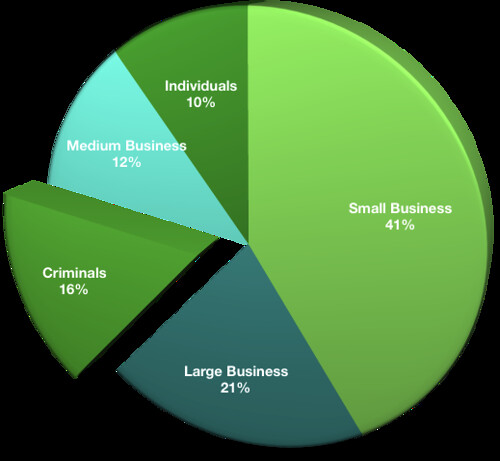 As an aside, the Bank says that it wants a scientist to be the face of the new notes and (god help us) says it will ask the public who it should be. But why a scientist? That doesn’t seem appropriate to me. Surely a much better choice would be the late and much lamented national treasure Sir Kenneth Dodd of Knotty Ash who, rather famously, kept enormous piles of cash in his attic because he didn’t trust banks. Or perhaps one of our greatest jockeys, Lester Piggott, who was once sent down for three years for tax evasion. I think the Bank should be told: the medium is the message.

Why do I keep going on about this? It’s because the people who benefit from the convenience of £50 notes (eg, builders avoiding VAT) are doing so at the expense of law-abiding tax-paying citizens (eg, me) and I have to fill in my tax form soon.